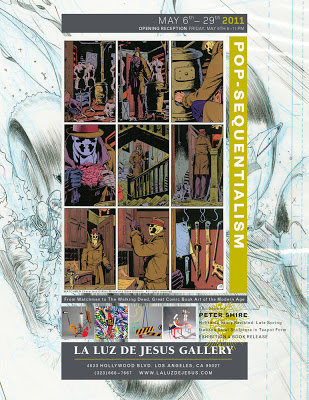 The exhibit runs from May 6th through May 29th following an opening reception on Friday, May 6th.  More details can be found on their site.

Most importantly, if anyone has an extra three grand and wants to get me a gift, I like this one.

“It’s incredible that the fine art world is finally taking (superhero) comics seriously.  An exhibition like this would have been out of the question not so very long ago.”

La Luz de Jesus Gallery, the birthplace of the Pop-Surrealism school of Post-Pop California Art announced the opening of an exhibition of comic book production art, spanning the last 25 years and highlighting some of the medium’s most acclaimed collaborations. The historical timeline begins with Alan Moore and Dave Gibbons’ Watchmen, first published in 1986, and arrives at Brian Michael Bendis and Michael Avon Oeming’s Powers -still publishing, and headed for a television set near you. The exhibition includes artwork from several landmark series that have crossed into the Pop Culture zeitgeist, finding audiences beyond comic book fandom, and changing the perception of the hobby and the format. Pop-Sequentialism opens May 6th, 2011 and runs through May 29th.

“Few art forms have gone as unchanged and unrespected for as long as sequential art, and yet none has had as tremendous an impact as the superhero comic book,” says curator Matt Kennedy. “More than just dynamic artwork on a page, this is a medium that tells stories. Comic books are the American mythology, and by presenting an exhibition that celebrates the collaborations of the greatest storytellers, I’m hoping to open a fine art dialogue on the importance of this art form.”

This past year, ten paintings by Andy Warhol –a painter who built his career riffing on the iconography of comic books, broke auction house records with realized sales surpassing one hundred, thirty-six million dollars. This show features forty important examples of modern comic book art from multiple, award-winning writers and artists, and there isn’t a single piece priced above three thousand dollars. This is a golden point of entry for patrons looking to diversify their Pop-Art collections with some of the most exciting creations from the best of the genre.

It’s also the first important survey of comic book art from the modern era. In years past there have been a handful of museum exhibitions showcasing art from comic’s Golden and Silver Ages and there have been several shows dedicated to a single title or imprint. Never before has such a landmark, and all-encompassing  collection been offered for sale as part of a single, gallery exhibition. It is perhaps fitting that La Luz de Jesus Gallery, which helped to establish fine art careers for former comic book dabblers Robert Williams, Gary Panter, S. Clay Wilson and Dave Cooper, should lead the charge.

“I started collecting some of the pieces for this show over fifteen years ago,” recalls Kennedy, “and while there are a few omissions (notably Frank Miller, whose original art commands tens of thousands of dollars), I think you’d be hard pressed to find a better collection of Eisner, Harvey, and Inkpot Award winning work from the last 25 years.”

ABOUT LA LUZ DE JESUS GALLERY
La Luz de Jesus Gallery was established in 1986 as the brainchild of entrepreneur and art collector Billy Shire, considered largely responsible for fostering a new school of California art and prompting JUXTAPOZ Magazine to dub him “the Peggy Guggenheim of Lowbrow.”

Showcasing mainly figurative, narrative paintings and unusual sculpture, the exhibitions are post-pop with content ranging from folk to outsider to religious to sexually deviant. The gallery’s objective is to bring underground art and counter-culture to the masses. Past shows have been groundbreaking, launching unknown artists who have since become famous, such as Manuel Ocampo, Joe Coleman, and Robert Williams.

A new exhibit opens on the first Friday of each month, with an opening reception that DETAILS Magazine calls “the biggest and best party in Los Angeles.”