“I have religious visions,” says James Gunn, writer and director of Super, the do-it-yourself superhero movie that opened in limited release last Friday.

“I’ve had them my entire life, since I was a kid.”

In Gunn’s movie, his protagonist, the sad-sack Frank Darbo, played by Rainn Wilson, is also visited by God. Literally.

Frank has plummeted to rock bottom.

His cheating wife Sarah, a recovering junkie played by Liv Tyler, leaves him for a drug pusher (Kevin Bacon). One day, after watching a campy morality show starring Nathan Fillion as a Christian superhero called the Holy Avenger, Frank is surprised by a giant finger bursting through his bedroom wall. Blood-red tentacles cut open the top of his cranium, and God pokes him on the brain.

From there on out, Frank dons his heartbreakingly-bad homemade costume and takes on mantle of fighting crime as Crimson Bolt. 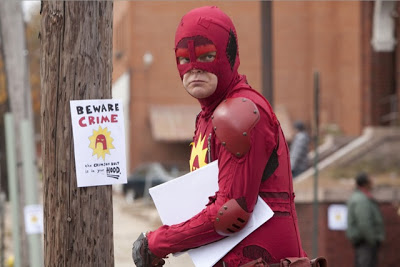 In the case of Gunn, whose spiky brown-blond hair and bright blue eyes animate an already semi-manic vibe, his vision wasn’t to fight crime.

“I honest to God felt called to make this film,” says Gunn, in Boston recently to promote Super. In a fit of what he calls “automatic writing,” Gunn knocked out the script’s first draft in a day. But (at least) one inner voice balked. He put the screenplay aside for years. “It wasn’t commercial. Too weird. Dark, so dark. It didn’t seem a wise move.” 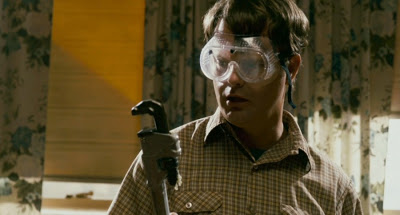 “The film has no style,” Wilson says, reached by telephone as he drove around Los Angeles after a read-through for The Office. “It has every style in the kitchen sink. It’s part violence, part comic book, part romance, part sci-fi, with special effects and an absurdist sense of humor.”

After a flurry of text messages between Gunn and his would-be star, Wilson signed on to the production. A-list actors Tyler, Bacon, and Ellen Page followed. The director found his courage to finally make the movie, and Super began shooting with a micro-budget of a $1 million, completed in just 24 frantic days during a freezing Shreveport, Louisiana winter. 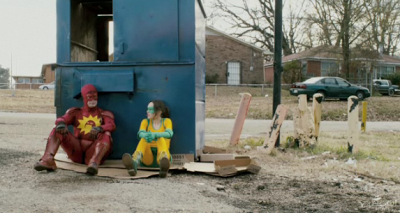 While Gunn mixes in some of the pop-camp aesthetic from the 1960s Batman TV series — look for the “POW! BANG! WHAMMO!” graphics — the film’s underbelly is bracingly grim. For anyone who has harbored romantic fantasies of becoming a caped crusader, Super feels like a smack to the head. Be forewarned: Super is more off-kilter than the Joker, and darker than Superman’s underwear drawer. 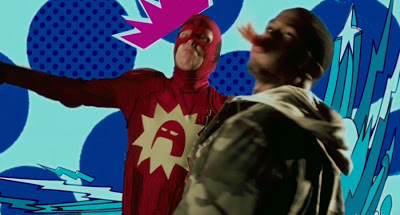 “We’re talking about the reality of the superhero genre, versus the fantasy,” says Gunn.

This reality check on comic book conventions also lured Wilson to the role. “I rolled my eyes at Iron Man 2,” he complains. “He throws a bus through a skyscraper and hundreds of people die. But we never see them die. It’s a popcorn effect. An explosion. It has no basis in reality.”

In Super, Wilson’s Frank has only one true superpower: his unwavering faith in doing good. So when it comes to saving the day, Crimson Bolt wields a nasty pipe wrench. “Shut up crime!” is his refrain before he rains down on evil-doers, smashing skulls indiscriminately, be they child molesters or line-cutters at the Cineplex.

“Their head splits open, then blood pours out. I don’t think it’s gratuitous. It’s just realistic. It shows you how rare [we see] the reality of violence,” Wilson says, proud that Super shows the ramifications of someone choosing the vigilante life. “In our movie only 14 people, die but you see the guts. When someone throws a bomb at someone, you see the chunk of guts flying in the air.” He finds Super more akin to Taxi Driver than to Kick-Ass, another film about an ordinary guy who goes super.

Wilson looks the part of an ordinary guy, and he has some Greater Boston roots to prove it. During summer breaks in the 1980s, he waited tables in Salem, where his mom lived at the time, and he attended Tufts University for his freshman year. “I was there just after Oliver Platt,” he remembers. “I did a play or two with Hank Azaria.”

Wilson says he played Frank/Crimson Bolt “straight … sincere and heartfelt.” When Frank later teams up with a besotted Libby, played by Page (star of Juno, which also featured Wilson), she eventually persuades him to let her become his gung-ho sidekick “Boltie.” While her portrayal is over-the-top hyperactive, Boltie is no lovable goof. Gunn says Super doesn’t trade on her funny green-and-yellow, Robin-like costume. “Libby is a psychopath,” says Gunn. “She’s doing what she does because she enjoys hurting people.” 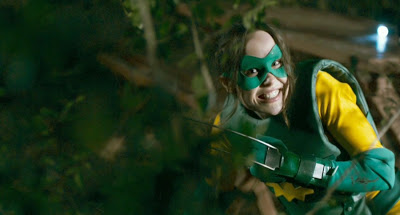 To say Gunn’s oeuvre has been unconventional would be an understatement. He got his MFA in creative writing from Columbia; his thesis novel was about a guy selling drugs to finance his action-figure collection (later published as The Toy Collector). While at Columbia, he landed a part-time gig with gore-happy Troma Entertainment, which led him to write the screenplay for 1996’s Tromeo & Juliet (he shares screenwriting credit with Jason Green and Lloyd Kaufman). It took two weeks and he was paid $150.

“That was the beginning of seeing filmmaking as a battlefield,” he says. “There’s a reason why DGA [Director’s Guild of America] members live 16 years [less] than the average person.” He finds moviemaking exhausting. “It’s your life,” he sighs. “Super was not fun at all. I hated it. But it was fulfilling.” 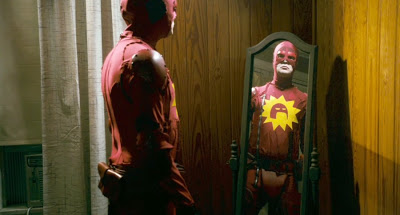 Super may be harsh, but Wilson finds it’s rich with ideas. “There’s stuff about people’s spiritual journey, the nature of violence, what is a hero. It examines that thin line between vigilante psychopaths and a hero.” The visceral fantasy of empowerment is one we all have felt. Frank is stuck, shut down, but as he breaks heads as Crimson Bolt, he breaks free of himself.

Ignore the bludgeoned bodies, and you might find, as James Gunn does, that Super is about innocence. “I think I’m interested in the innocence of childhood contrasted with how we are as adults,” he says. “Frank is innocent. His intentions are pure.”

Or, to put it another way, Gunn says, “The story of Frank is sort of the story of me.”

Ethan Gilsdorf is the author of Fantasy Freaks and Gaming Geeks. He can be reached at [email protected].