Granted, it’s execution is limited by the budget, but Cross looks like a ridiculously entertaining film with no idea too outrageous or silly to integrate with a straight face.

Check out the full press release and cover art after the jump.

When beautiful, young women start disappearing from the streets of L.A., it’s time for good-guy Callan (a.k.a. Cross) and his crew of weapons experts to kick into high gear and take out the trash. Granted incredible power by his ancient Celtic cross, Callan must fight to stop an immortal Viking from destroying mankind with his doomsday device. Also starring: Tom Sizemore, Jake Busey and Lori Heuring.
Directed by Patrick Durham, Cross was written by Patrick Durham and Jonathan Sachar and Tanner Wiley. The movie was produced by Jonathan Sachar, Patrick Durham and Judy Durham and executive produced by Rocky Scapellati, Tanner Wiley, Stuart Cameron, Stu Higton, Constantine Brancov, Robert Lamey, Anne O’Shea and Robbin Wood.
Bonus Features Include:
Cross has a runtime of approximately 105 minutes and is rated R for violence and some language. 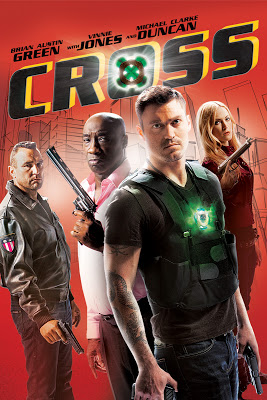