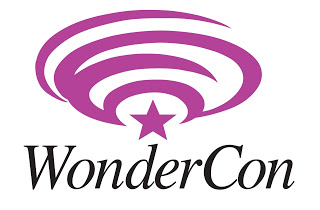 “We’re off to WonderCon,” my thirteen-year-old son shouted out the window of my car on Friday afternoon as we pulled away from his Middle School. Our excitement had been building all week and here we were, finally, on the road to San Francisco for the 25th annual celebration of comics, WonderCon.

It took us two and a half hours to make the trip into the city. The ride was punctuated by blasting The Clash on the stereo, excited discussions about all the things we hoped to do and see on our adventure, and heated discussions about continuity, team-ups, and whether it is the writer or the artist who makes great comics great.

After stuttering through the thick miasma of traffic on the Bay Bridge, San Francisco finally loomed in the windshield and we gibbered and giggled like the excited fanboys we are.

See, I never expected to be a father.

It has been the greatest happy accident that has ever occurred in my life.

My son and I, though very different people, share a great love for comics, and this love has made our relationship close and strong. My father never really understood or seemed to care much about my passion for comic books when I was a kid. I don’t remember a single conversation with him about them.

It was my mother who dropped me off at the odd comic convention at the Dallas Marriott or some other hotel in the late 1970’s. It was my own feet that dragged me to the local 7-11 to pick up my weekly fix. It was my friends with whom I would discuss and dissect and devour all things Marvel and DC.

My father, on the other hand, took me to the opera and museums. We would watch Fred Astaire movies together and eat at exotic restaurants that would randomly bloom in the Dallas hinterlands. We were close in that mentor/student sort of way, but I loved comics and I guess he just didn’t understand. I love my father, but it is only recently that I’ve really gotten to know him.

My own son, though, has been spoon-fed comics since day one.

I feel a little guilty that comics weren’t something he discovered on his own, and I wonder sometimes if his love of comics comes more from familiarity than anything else, but the obvious joy he experiences when we talk about comics and the independent reading he does and his confidence in disagreeing with me about certain books all point to the fact that his experiences are his own and not the obvious outcomes of my Skinner-like indoctrination.

Comics have created a dialogue between my son and me. I understand how he thinks about things better because of our conversations about comics. Comics, as strange as it may sound, have deepened our bond.

And so, to WonderCon. WonderCon 2011 is actually our fourth WonderCon together.

This year, though, our plan was to really experience the whole celebration. In the past we had only spent four or five hours in the center, mostly focused on gawking and buying. This year we were excited about attending panels, meeting creators, finding small press gems, and, of course, gawking and buying. We had our schedules mapped out and we were good to go. This WonderCon was going to be the greatest ever, because we were truly going to celebrate our geek. This WonderCon had taken on Ruritanian proportions.

But the best laid plans of mice and men…

Friday at WonderCon was everything we hoped it would be. We got to the Moscone at around 3:00 and jumped right in to the fray. Together we wore our badges around our necks and strode like new souls at the gates of heaven up and down the aisles taking it all in.

People from all walks of life are there in epic celebration of this medium that binds us together. My son has a bit of sheltered life living in the country as we do, so it’s great for him to see so much diversity. One thing I love about WonderCon is that you feel so much a part of a wide community — that you are not a geek alone with your funny books, but you are part of a vibrant and passionate group of people.

WonderCon is filled with boys and men, women and girls, gays and straights, people of every ethnic and socio-economic background in all shapes and sizes. Inside the Moscone Center during WonderCon, you let your Geek Flag fly and you are embraced. 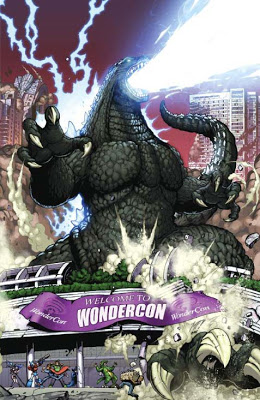 So my son and I wander the aisles.

At around 4:45 we head on over to our first panel in Room 103: “Spotlight on Robert Kirkman” My son and I are both so excited to see Kirkman. Together we have read all 78 issues of Invincible. I read the first 24 or so issues to him at night in bed, month by month, and then he started reading the new issues to me. Recently we have begun reading each issue independently as they come out and then come together to talk and talk about characterization and plotlines and artwork and Science Dog. Invincible is definitely one of “our” comics.

And now here was an opportunity to hear from Kirkman himself. And we would experience it together.

My son and I wandered into Room 103 at the tail end of Adam Hughes’ Spotlight panel.

We got there just in time to see some poor fellow start to ask Hughes about The Walking Dead series, mistaking Hughes for Kirkman. I guess from a distance they do kinda look alike, both being heavy-set blondish guys with beards. The embarrassment on the face of the mistaken questioner was heart-breaking, but Hughes quickly turned this into a moment of inclusion by thanking the questioner for this compliment and using it as an excuse to crack into the water bottle that had been set aside for Kirkman’s upcoming panel.

This is an example of the sense of community I was talking about that occurs at a gathering like this. If something like this happened on the internet, the trolls would have crept out of their caves and vilified this poor sap for his honest mistake, but here at WonderCon, among the people face to face, we understand and we laugh and we include.

These are the moments that make going to these conventions such an important experience for us, for fanboys, for my son.

He was human and funny and warm and appreciative. It was great to see Sina Grace sitting next to him, proving once and for all that he is indeed a man. My favorite part of Kirkman’s panel was when he kept talking about how much he loved what he was doing and how much of it he did for his own sense of adventure.

When asked about whether he was concered about the differences between the Walking Dead comic and TV show, he was quick to point out that doing a direct transfer would be boring to him and how he loved to explore a new creative outlet. When asked if there were any established superheroes he would like to take on, he admitted that he had wanted to do Spider-Man, but now realized that there was so much more he could do through creator-owned titles, why would he want to limit himself?

Also during the Kirkman panel he introduced Brandon Seifert and Lukas Ketner who have created one of the best books I have seen in awhile, Witch Doctor. The pages he showed looked fantastic. He called Seifert up to talk about the book and his obvious enthusiasm for it was infectious and his promise of the Doctor “shaking an evil baby” had me hooked. After the panel, my son and I capered over to the Image Booth, purchased the preview copy of Witch Doctor, thumbed through it quickly, and loved every moment of it. Then there was Seifert and Ketner sitting there and I got to chat with them and they signed the book.

This experience is another one of the great things that can happen at an event like WonderCon, being introduced to something new, getting on board, meeting the creators, and feeling part of something big.

My son and I wandered around WonderCon for little while after that, taking it all in and laughing and talking and being part of the community. The excitement of the whole thing, coupled with the long drive and the endless walking, though, had taken their toll, and by 7:30 or so we were both exhausted and headed back to the hotel. There we talked about our day and looked at our new books and planned our further adventures the coming morning.

For some reason, I had a very restless night.

The next morning we got our complementary muffins and coffee in the hotel lobby. Suddenly, I started to sweat horribly and felt nauseous. We took the elevator back up to our room and somewhere between the 5th floor and the 7th floor, I lost consciousness. I literally blacked out.

Needless to say, this threw a bit of a crimp in our plans for the day. After a couple of hours, I was able to rally enough to head back over to the Monscone, but I had become one of the Walking Dead. My son, astute and compassionate, realized that I shouldn’t be wandering around like this, especially in public, so he requested that we return to the hotel and I was more than happy to oblige.

We never made it back to the Moscone and WonderCon continued without us.

I was heartbroken, not just for myself, but especially for my son. Here it was, Shangri-La and his old man was a sorry hunk of flesh, more burden than companion. He was good, though, and as I drifted in and out of sleep for the rest of the day, he was by my side, reading comics and asking me how I was doing. I know he was disappointed. Hell, I was disappointed, but we were together, and that, in and of itself, was pretty special.

We left early the next day.

On the drive home I kept apologizing for ruining his WonderCon. After around an hour or so of driving and my thirtieth of so apology, he stopped me and said, “Dad, it’s OK. I had a great time.”

“What was your favorite part?” I asked him.

“Getting to do this with you,” he said.

WonderCon 2011 – while it wasn’t quite what I planned, it ended up being more than I could have hoped. WonderCon 2012 is only a year away.

In this article:Convention Report, Written by Daniel Elkin

PAX East, the East Coast’s largest video game industry convention, expanded from 3 to 4 days at the Boston Convention and Expo Center with...

After 20 Years, How I Fell Back in Love With Dragon Con

This year’s FanExpo Boston takeover of Boston Comic Con came with not only a change of venue, but an entirely different experience for BostonCon...

The Jedi Knight looks over the silent pairs of men and women lining the walls. He gives the signal and suddenly the room is...