This marketing ploy seemed to work well for IDW on their Godzilla book and for Avatar Press and their War Goddess release.  Now Marvel is jumping on the bandwagon.

I have to say I kinda like this idea, as it does foster a sense of community between comic fans and their LCS, and also shows that Marvel does acknowledge that the Direct Market is important for their sales.

Just like everything else, though, let’s hope that Marvel doesn’t beat this idea to death.

I’m sure DC is watching this carefully. Which book do you think they are going to try this with?

The second LCS variant by Humberto Ramos is after the jump. 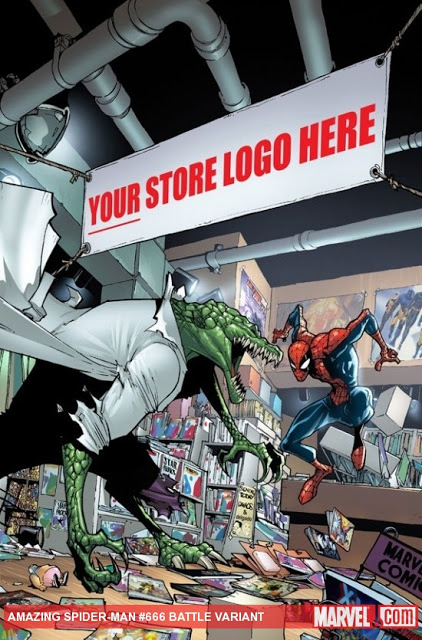 Be sure to head on over to your local shop immediately and tell your retailers which one you want because both of these commemorative AMAZING SPIDER-MAN #666 COMIC SHOP VARIANTS can’t be ordered together. Here’s your chance to show your comic shop some support as these personalized variants are a one of a kind, must-have item! With heroes and villains crawling all over Manhattan with Spider-Powers, can Spidey figure out a cure in time before mass chaos runs wild? Find out this July as Spider-Island begins and you show store spirit with the AMAZING SPIDER-MAN #666 COMIC SHOP VARIANTS!

*Note to retailers: These variants have an early FOC of 6/13. Retailers will find all ordering and uploading information in Marvel Mailer