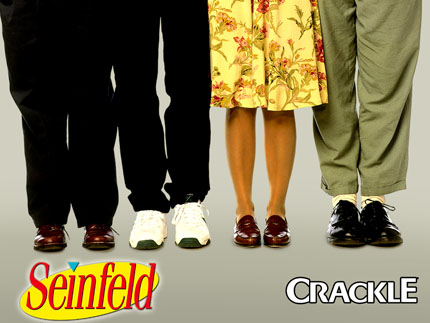 It’s Thursday, which means you’re at the point of the week where it’s all about looking busy at work.

Which means, what better time to pop in some earbuds and watch ten episodes of Seinfeld at your desk.

After the jump, watch Crackle‘s Seinfeld: The Best of Jerry Collection which includes such beloved episodes as The astronaut pen, the Cigar Store Indian and the Rye.

Not that there’s anything wrong with it…

THE JACKET
While shopping with Elaine, Jerry discovers a suede jacket that is totally irresistible in spite of its hefty price tag.

THE LIBRARY
The library contacts Jerry about an overdue book dating back to 1971. According to Kramer, with a fine of 5 cents a day for 20 years, the cost could come to $50,000.

THE PEN
Jerry and Elaine visit Jerry’s parents in Florida, where Jerry’s father is being honored by his condominium association. Jerry admires a special astronaut’s pen owned by one of the association.

THE VIRGIN
Jerry and George strain to think of an idea for a TV series, but Jerry can’t forget about his date with a beautiful young woman who confesses to him that she’s still a virgin.

THE CIGAR STORE
Elaine’s Native American friend Winona thinks Jerry is racially insensitive when he presents Elaine with a cigar-store Indian statue as a peace offering after not driving her home from George’s place.

THE WIFE
Jerry lets his girlfriend pose as his wife so that she can receive his dry-cleaning discount. But the scam backfires when his family learns of his “marriage.”

THE SOUP
Jerry regrets accepting an expensive suit from a comedian he doesn’t like.

THE RYE
George must replace a loaf of bread his parents took from Susan’s mom and dad.

THE COMEBACK
As Jerry discovers he’s been duped by a hapless tennis pro, George seeks revenge against a co-worker’s cutting remarks; Kramer enlists Elaine’s help in drafting a living will.

In this article:Comedy/Parody, Television, Watch This