When I think about what movies I loved as a teenager, I automatically go to the most obvious ones, the familiar stuff that anyone who grew up in the ‘70s might pick:

Star Wars, Close Encounters, Jaws, The Exorcist, and any number of car-chase movies, disaster movies, vigilante movies—isn’t it nice to know that the fads of the ‘70s are still going strong today?

But there were plenty of more obscure films that had just as big an impact on me as these popular faves.  Movies that I caught more or less by accident, just because they were playing at my neighborhood grindhouse.

One of these was an oddball little flick called Phantom of the Paradise. 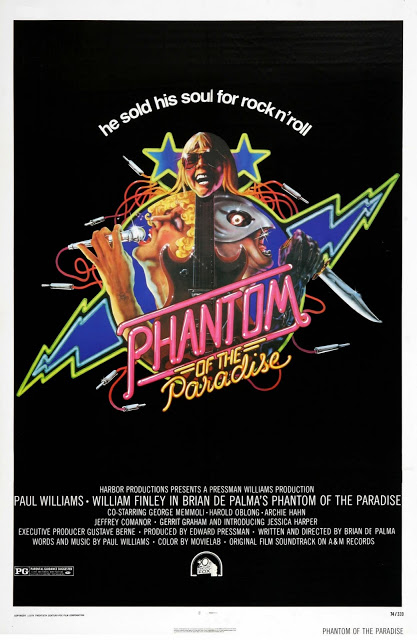 Released in 1974, Phantom of the Paradise was an early film of director Brian De Palma, who went on to direct such high-profile blockbusters as Carrie, Scarface, The Untouchables and Mission: Impossible.  He was also a friend of George Lucas, and made important contributions to Star Wars.  More on that later.

I was twelve years old when I saw Phantom of the Paradise, and it clearly had a strong impact on me, because I could still vividly remember it almost forty years later.  Then again, I also vividly remember Santa Claus Conquers the Martians.

For years I avoided seeing Phantom again because I didn’t want to ruin my fond memory of it.

Finally I broke down and bought it on DVD.

Does it hold up?

Well…it’s not quite the gory, sexy masterpiece I thought it was in ‘74, but I still think it’s a blast, and even more relevant now in its satire of corporate-manufactured stardom.  The campier, more dated elements are compensated for by the nostalgia factor, which kicks in even before the opening credits with a voiceover by Rod Serling. 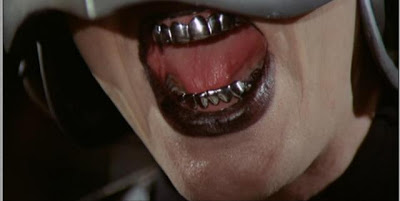 For a low-budget film, Phantom of the Paradise is amazingly ambitious.  Hey, a glam-rock musical that not only updates Phantom of the Opera, but also Goethe’s Faust, using the latter storyline as a metaphor for the soul-sucking nature of the music industry?  Come on!

The move stars relative unknown William Finley as nebbishy songwriter Winslow Leach, whose rock opus is stolen by an evil record company CEO named Swan, played by Paul Williams (who really composed all the songs in the movie). 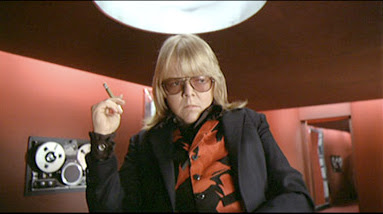 Right away I can sense you thinking, Paul Williams?  That guy who looks like Truman Capote, and who wrote the songs for The Muppet Movie?  Mr. Rainbow Connection?  HE’S the villain?

Yes.  And he’s actually kind of great, not least because he has that creepy flaxen-haired baby face.  Who better to play a modern Dorian Gray—a man who sells his soul for eternal youth?

Paul Williams looks like he’s about 12 in this movie (actually he’s probably like 40), and there is something very wrong about seeing his hairless chest being caressed by sexy adult women.  Which works perfectly in this context, because we are supposed to sympathize with pitiful Winslow Leach, who has lost not only his songs but also his ideal singer, Phoenix (Jessica Harper), to Swan’s corrupting influence.  Soon poor Winslow also loses his freedom, as Swan has him framed and sent to prison. 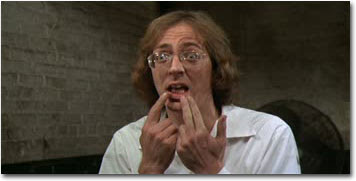 Hearing his stolen music on the radio, Winslow escapes jail and breaks into Swan’s corporate headquarters, Death Records, where he is horribly maimed when his head gets caught in the record press—ew.  He escapes the cops by jumping in the river, and is assumed drowned.

But no—Winslow lives…as the Phantom!

Donning a Batman-like outfit and glam-tastic silver helmet, he begins sabotaging Swan’s new rock palace, the Paradise.  I won’t say more, but this is where the plot gets interesting, switching from simple revenge fantasy into darker Faust territory.

Or perhaps I should say Sith territory.

Hey, he’s a mangled guy who talks through a mechanical voice box, breathes heavy, and wears a black leather suit with a helmet and cape.  Coincidence?  I don’t think so—not since we know that De Palma and Lucas were friends.  The question is, who had the idea first?

One could assume it was De Palma’s concept since Phantom of the Paradise came out three years before Star Wars.  Then again, Lucas had been tinkering with his Star Wars story (and presumably the Vader character) at least as far back as 1971, when he first registered the title.

If Lucas and De Palma were in the habit of bouncing ideas off each other, it’s conceivable that Lucas was so busy developing American Graffiti that he allowed De Palma to “borrow” the Vader tropes for his Phantom.

Whatever the case, there were clearly no hard feelings on either side, because Lucas later sought De Palma’s advice on Star Wars, and De Palma even wrote the final draft of the film’s opening crawl.

They weren’t competitors; they were friends, sharing ideas.

Those were the days, man.

In this article:Movies/DVD, Nostalgia, Star Wars, Written by Walter Greatshell