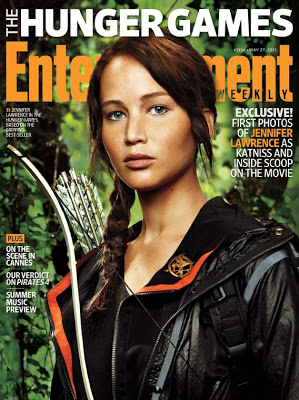 Entertainment Weekly has the first look of actress Jennifer Lawrence in her role in the upcoming film The Hunger Games, the first part of a trilogy based on the novels by Suzanne Colllins.

The Hunger Games is being directed by Gary Ross and the article described her initial meetings with the director:

(It was) during the height of Oscar season. “He was asking me what the experience was like,” she recalls, “and I just kind of opened up and said, ‘I feel like a rag doll. I have hair and makeup people coming to my house every day and putting me in new, uncomfortable, weird dresses and expensive shoes, and I just shut down and raise my arms up for them to get the dress on, and pout my lips when they need to put the lipstick on.’ And we both started laughing because that’s exactly what it’s like for Katniss in the Capitol. She was a girl who’s all of a sudden being introduced to fame. I know what that feels like to have all this flurry around you and feel like, ‘Oh, no, I don’t belong here.’”

When Lawrence was offered the role, she describes her response as a mixture of elation — and desperate anxiety. “I knew that as soon as I said yes, my life would change,” she says. “And I walked around an entire day thinking ‘It’s not too late, I could still go back and do indies, I haven’t said yes yet, it’s not too late.’”

After the jump check out the short film, Hunger Games: Katness and Rue directed by John Lyde, which got actress Danielle Chuchran the opportunity to audition for Ross.