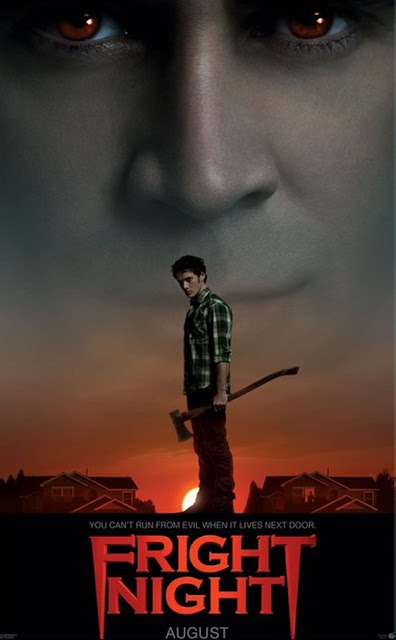 So, Fright Night the remake gets a trailer.
I want to be excited, because it looks fairly entertaining but I can’t help but be cautious.
The original is one of the few Eighties horror films that managed to be clever enough to still be entertaining today.  One of the pivotal characters in the original film is Peter Vincent (played by Roddy McDowell), a television horror host who teams with lead character Charley Brewster (William Ragsdale) to do battle with Brewster’s new neighbor, charming vampire Jerry Dandridge (Chris Sarandon).  Along the way Brewster’s best friend Evil Ed (Stephen Geoffreys) gets caught in the middle of this battle of good versus evil.
When the remake was first announced, my biggest concern was the handling of the Peter Vincent character.  Horror hosts are not only a thing of the past, but the almighty 18-24 year old is unlikely to have ever heard of one (nevermind, a UHF station showing classic horror movies).  The writers, reimagined Peter Vincent as a Vegas magician (and cast the good Doctor, David Tennant as a Vegas magician/TV personality).
With an impressive cast including Anton Yelchin, Colin Farrell, Christopher Mintz-Plasse, Toni Collette, Imogen Potts and Dave Franco, Fight Night looks like a lot of fun.
Just there’s no David Tennant in the trailer…