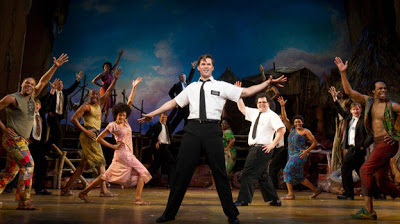 From the minds of South Park‘s Trey Parker and Matt Stone, The Book of Mormon is already a huge success on Broadway, with the show sold out for months, in no small part to it’s amazing 14 Tony nominations.

The cast recording is currently streaming for free, and on Friday, July 1st, there will be a free fan performance of the show.

Find out how to get tickets via the press release after the jump.

“HEAVEN ON BROADWAY.
‘The Book of Mormon’ achieves something like a miracle. A celebration
of the privilege of living inside that improbable paradise called a musical comedy.”
Ben Brantley, THE NEW YORK TIMES

TO PRESENT FREE FAN PERFORMANCE
FRIDAY, JULY 1 AT 2:00 PM
THE BOOK OF MORMON will present a free fan performance on Friday, July 1 at 2:00 PM.     The entire theatre will be offered to entrants of the BOOK OF MORMON lottery, giving fans a chance to win a free pair of tickets for the performance.
All lottery entries, whether win or lose, will count as one entry in the sweepstakes toward winning tickets for the free performance.   If you have multiple lottery entries, they will count multiple times toward winning free tickets for the performance.  You can also “check in” to The Book of Mormon on Foursquare and Facebook at the theater during the lottery for an extra entry.
Winners will be selected on or around Monday, June 13.  All winners will be notified approximately two weeks prior to the performance via email and will be asked to confirm their attendance.   Detailed check-in information will be sent via email.
THE BOOK OF MORMON features book, music and lyrics by Trey Parker, Robert Lopez and Matt Stone.   The world premiere musical is choreographed by three-time Tony Award-nominee Casey Nicholaw and is directed by Nicholaw and Parker.
THE BOOK OF MORMON has been nominated for 14 Tony Awards, including Best Musical, 12 Drama Desk Awards, including Best Musical, 6 Outer Critics Circle Awards, including Best Musical and the Drama League Award for Best Musical.
THE BOOK OF MORMON stars Josh Gad as Elder Cunningham, Andrew Rannells as Elder Price, Nikki M. James as Nabalungi, Rory O’Malley as Elder McKinley and Michael Potts as Mafala Hatimbi, with Lewis Cleale, Brian Tyree Henry, Scott Barnhardt, Justin Bohon, Darlesia Cearcy, Kevin Duda, Asmeret Ghebremichael, Clark Johnsen, John Eric Parker, Benjamin Schrader, Michael James Scott, Brian Sears,  Jason Michael Snow, Lawrence Stallings, Rema Webb, Maia Nkenge Wilson and Tommar Wilson. The production also features Graham Bowen, Ta’Rea Campbell, Jared Gertner, Tyson Jennette, Valisia LeKae, Douglas Lyons, and Nick Spangler.
THE BOOK OF MORMON features set design by Scott Pask, costume design by Ann Roth, lighting design by Brian MacDevitt and sound design by Brian Ronan.  Orchestrations are by Larry Hochman and Stephen Oremus.  Music direction and vocal arrangements are by Stephen Oremus.
Ghostlight Records will release the Original Broadway Cast Recording for THE BOOK OF MORMON, digitally on Tuesday, May 17 and physically on Tuesday, June 7.
Tickets are available at Telecharge.com, by calling Telecharge.com at 212-239-6200 or in person at the Eugene O’Neill box office (230 West 49th Street).
www.bookofmormonbroadway.com
Follow THE BOOK OF MORMON on Twitter: @BookofMormonBWY and download a Free Song on Facebook