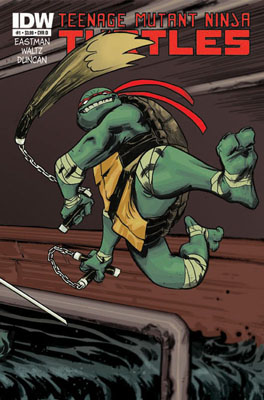 There’s Turtles in the future.  They are teenagers.  They are also mutants.  Oh, and by the way, did I happen to mention that they are Ninjas?

IDW has a new TMNT series coming out in August.

Check out the press release after the jump!

IDW Publishing and Nickelodeon today announced that the first TEENAGE MUTANT NINJA TURTLES comic series, featuring the beloved “Heroes in a Half-shell,” will premiere in August 2011. The TEENAGE MUTANT NINJA TURTLES will be back in action and ready to fight off evil once again, with an impressive creative team led by TMNT co-creator Kevin Eastman!

Starting in August, IDW’s TEENAGE MUTANT NINJA TURTLES will kick off with a brand new installment of the original series, led by Eastman and co-writer Tom Waltz (Silent Hill: Past Life, Infestation: Outbreak). Phenomenal new-comer Dan Duncan will bring the Turtles to life with dynamic interior art, while Sam Kieth and Walter Simonson provide eye-catching covers for issues one and two, respectively. Eastman will also provide layouts for Duncan’s art, as well as variant covers.

This first TEENAGE MUTANT NINJA TURTLES series will feature new and exciting storylines that maintain the “turtle power” core beloved by millions of fans. Leonardo, Donatello, Michelangelo, and Raphael reunite to bring their ninja aptitude and teenage attitude in these all-new, action-packed adventures based on the original series. The first story arc will tell the origin story of the Turtles and introduce a new villain, the fearsome mutant alley cat, Old Hob. Featuring a cast of familiar characters, including Master Splinter, April O’Neill, Casey Jones, and true to the spirit of the original comics created by Eastman and Peter Laird, theTEENAGE MUTANT NINJA TURTLES are bigger and badder than ever, and ready to rock old and new fans alike.

IDW and Nickelodeon have a long-term partnership to offer an all-new installment of the original Teenage Mutant Ninja Turtles comics and graphic novels. IDW’s new comics are part of a larger initiative to bring Turtles to a new generation of fans, starting with these new storylines from the original series that recapture the magic of the original Turtles comics. Additionally, in fourth quarter 2012, Nickelodeon will premiere a new CG-animated version of the wildly popular Teenage Mutant Ninja Turtles franchise.