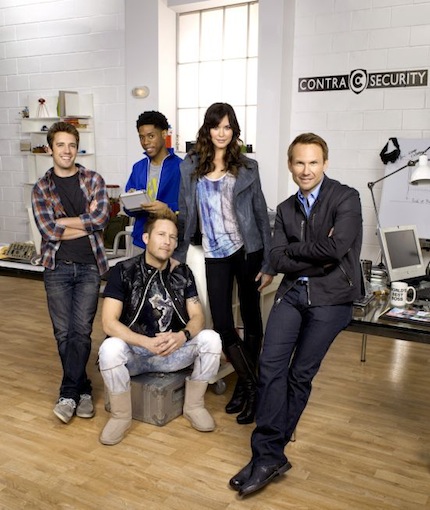 A special Comic-Con themed episode of Breaking In premieres tonight!

Oz (Christian Slater) and the team Geek Out At Comic-Con! When Oz and the team are assigned to protect the sequel to “The Goonies” at a comic-con convention, suspicion turns to fanboy Cash when the only copy of the movie goes missing in the all-new “Take the Movie and Run” episode of Breaking In airing tonight, May 4 (9:30-10:00 PM ET/PT) on FOX.

FOG! had the chance to discuss the series and episode with co-creator Adam F. Goldberg.

FOG!: Breaking In reminds me a bit of a post-modern take on Sneakers. What was the inspiration of the series?

Adam F. Goldberg: I sat down with Seth Gordon, who directed King of Kong, one of my favorite movies of all time, and he’s been obsessed with the hacking world for a long time. I thought it was a really interesting way to do an office show which could mix capers with very relatable office stories. So, the inspiration for the show really was a way for Seth and I to do what we pitched as “The Office meets The A-Team.”

You have a pretty amazing cast, among them Christian Slater, Bret Harrison, Michael Rosenbaum, Odette Annable; each of them a strong enough actor to carry their own series. How did you assemble this ensemble and were the characters written for any of these actors specifically?

The first person we cast was Bret Harrison, who was coming off of Reaper and had a bunch of offers that year. He responded to the material because he got to shoot a little movie every week. Getting Bret kinda felt like we had won the lottery. Next was Odette, who I knew from movies and had that perfect blend of sexy and badass. We feel very fortunate to have someone that could deliver the jokes and look amazing doing it. Alphonso was a total find– originally the role was written for a hulk like Rampage Jackson. Then Alphonso came in and was so funny that he won the role of Cash. Then there’s Slater. Initially the role of Oz was written for someone who was a lot older– a total Rageaholic. Christian saw promise in the concept of the show and really worked with me to invent the character of Oz. He’s the one who put in the Star Trek chair and all the quirks and made him a man of mystery. But if there was someone that a role was written for, it was Michael Rosenbaum. I’ve known him for a while and did another pilot with him for the SyFy channel about his experiences as Lex Luthor. I know how funny he is and I know a lot of people don’t see him that way, so I wrote the role of Dutch specifically for him. He’s only in the pilot for a minute– he did it as a favor, and there was such a great response we kept bringing him back, week after week.

There definitely is a geek cred in this series from the very beginning with Slater’s character, Oz, having Captain Kirk’s command chair in his office and Alphonso McAuley’s character Cash is a die hard fanboy. Yet, the geek subtext feels honest and organic, rather than the result of a studio suggestion. Why was it important to you to write within this world?

They say write what you know and fortunately for me, that’s Tron, Star Wars, Back to the Future, Leeroy Jenkins, ALF. You know — awesome stuff. The geek world is my world. My friends — we’re all a bunch of geeks, so writing in that arena feels really comfortable and always interests me.

Tonight’s episode focuses on Comic Con and more specifically, centers around a lost copy of a fictitious Goonies sequel. How did this episode come about?

It’s a movie I always wanted to do! I pitched producer Dick Donner the Goonies sequel AND the Goonies musical.

When we were thinking of a movie that could be pirated– I thought — okay, what’s a movie that all the fans wanna see? Goonies 2: The Legend of Sloth!

Goonies was the movie that made me want to be a writer– and this was a way to have me do an homage to a film that defined my childhood.

Among your writing credits are Fanboys, the Muppet Wizard of Oz, The Jetsons, Revenge of The Nerds and How To Train Your Dragon. What do you geek out over?

I collect Transformers, Godaikins, and Machine Robo. That’s a fancy word for GoBots. I also love TRON— the prize of my collection is a pair of light up TRON: Legacy Adidas sneakers. Only 10 were made and I have two pairs that I waited in line for several days to get.

I also geek out over Adam Sandler movies and it’s really awesome that I’m doing this show with Happy Madison and Doug Robinson. It’s kinda been a dream of mine to be part of that company and now I have a show on the air with them. 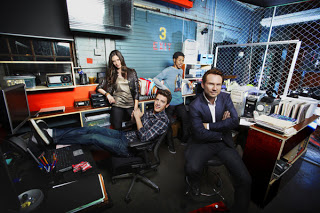 In this article:Geek, Interview, Television