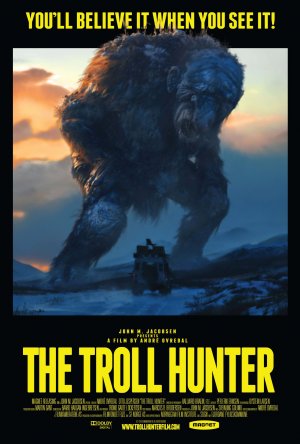 The Troll Hunter is a mockumentary  in the same vein as The Blair Witch Project.

Three young kids venture into the woods in hopes of making a documentary about one thing and end up stumbling into a life and death struggle with the supernatural. I was very excited going into this movie after seeing the preview a few months ago, however, the trailer proved to be a lot more exciting then the actual film.  Overall, I was very disappointed.

There isn’t anything terribly original in this entire film.  In fact, The Blair Witch Project already did the “kids in the woods making a documentary” over a decade ago, and in my opinion they did so in a much creepier way.

The Troll Hunter also the overused shaky camera work thing and doesn’t do so in a way that brings anything new to the table.  If shaky camerawork bothers you, I’d suggest picking up a few tabs of Dramamine on your way over to the theater because there’s a lot of it.

The film drags in the beginning while the filmmakers establish a misdirection, having the characters think they’re making a documentary about a bear poacher who then turns out to be a professional troll hunter. Yet, it’s all a bit foolish for the viewer as the film’s title gives away the first twist, wasting almost thirty minutes before that first reveal.

I will give The Troll Hunter credit for two things.

First, when we finally get to the first big troll appearance and if you don’t mind the handheld camerawork, the scene was very cool and I was on the edge of my seat. Second, the special effects throughout the entire film are top notch. The trolls look great and they’re flawlessly weaved into the landscape of the film.

That said, there are a lot of things this film needed to do better to win me over.

The film has four major troll encounters, but there’s an awful lot of filler between each encounter and most of that time is just spend driving across the beautiful Norwegian landscape.  This is the kind of film where you don’t want filler or scenery.  You want trolls.

As an American viewer I think a lot of the films references were lost on me.

There seemed to be a lot of references to things that exist in troll lore or Norwegian fairy tales. I understood some, such as one of the trolls living under a bridge. Unfortunately, these intricate details are extraneous and don’t add much to the film.  Even the movie science, using UV lights to fight the trolls has been an established weapon in several films since the Blade series.  Not an awful lot of innovation there.

The film suffers from an extremely loose plot focusing on the trolls exhibiting strange behavior and precipitating attacks outside of their territory.  Unfortunately, the film feels directionless at times and it doesn’t really do much to keep the viewers attention, especially when comments about troll behavior within the film contradict other information.

The film needed to be tightened by at least twenty minutes, and a stronger plot and characters could have made this a must see.  If you go into The Troll Hunter with low expectations you might like it better then I did, but for the curious viewer, wait until DVD when you can just check out the troll scenes.