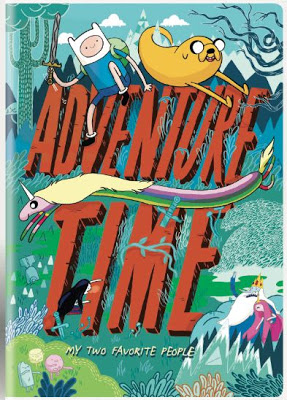 If you haven’t seem Adventure Time, you’re missing out.

The Cartoon Network series is deceptively simple with an inimitable charm that is endlessly appealing and entertaining.

DVD fans, what time is it?  It’s Adventure Time!  This September, Cartoon Network Enterprises (CNE) and Warner Home Video will release the highly-anticipated debut of the quirky and outrageous hit television series Adventure Time on DVD with the release of Adventure Time “My Two Favorite People.”  Touted as one of the “Best of 2010” by The Los Angeles Times, the animated odyssey follows a human boy named Finn and his best friend Jake, a 28-year-old dog with magical shape-shifting powers, on a series of peculiar adventures in the Land of Ooo.
This first release in the Adventure Time home entertainment catalog, the DVD contains a collection of 12 great episodes from the series’ first two seasons, headlined by the “My Two Favorite People” episode that follows Jake as he tries to get his two best friends – Finn and Lady Rainicorn – to become friends so he doesn’t have to split his time between them.  Other fun-filled escapades on the DVD range from Jake and Finn breaking into the Ice King’s palace to battling magic beans and saving Princess Bubblegum, and a “Little Did You Know” special feature provides fans with character profiles from the series’ cast of quirky characters.  Adventure Time “My Two Favorite People” will be available on DVD on September 27, 2011 for the suggested retail price of $14.97.
Because people of all ages – from 2 to 22 to 52 – have made Adventure Time their favorite show, CNE is offering products for everyone.  As such, there will be two types of DVD product released in the home entertainment collection: lower priced episodic releases for kids and their parents, such as Adventure Time “My Two Favorite People,” and full season collector sets packed with an ooo-full of special features for the adult fan.  Information on the first season collector set will be available in the coming weeks.
“Adventure Time has emerged as such a special show with wide appeal to fans of all ages that we wanted to make sure there was product for everyone,” said Erik Resnick, vice president of home entertainment, CNE.
Created by Pendleton Ward and produced in partnership with Frederator Studios, Adventure Time introduces viewers to unlikely heroes Finn & Jake, buddies who traverse the mystical Land of Ooo and encounter its colorful inhabitants. Teeming with imposing mountains, lush green plains, accessible forests, ubiquitous prairies and winding rivers, the cities and towns in the Land of Ooo are filled with bizarre characters in need of unique assistance. Whether it’s saving Princess Bubblegum, mocking the “oxy-moronic” Ice King or rocking out with undead music wiz Marceline the Vampire Queen, for Finn & Jake it’s always Adventure Time.