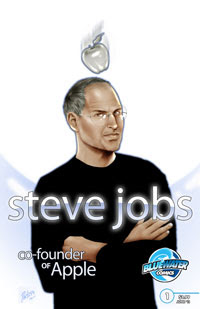 This one shot is penciled by Chris Schmidt and promises to offer “a unique insight into the Apple CEOs legendary drive to the top and his continuing fight to stay there.”

I assume you will be able to read it on your ipad.

Steve Jobs is nearly as iconic as his company logo. He’s been called an innovator, risk-taker, a visionary and a genius. He’s also been called unscrupulous, an egomaniac and a corporate pirate. Both sides of this complex personality are examined in an upcoming Bluewater Productions biography comic book tracing Jobs’ life and career.
Scheduled for an August 2011 release, “Steve Jobs: Co-Founder of Apple” offers readers a unique insight into the Apple CEOs legendary drive to the top and his continuing fight to stay there.
“Admire him or hate him, Jobs’ vision and business acumen revolutionized the world,” said writer CW Cooke “Between he and Microsoft founder Bill Gates, you would be hard pressed to find someone with greater influence over how we communicate, interact and do business over the last 30 years.”
The 32-page issue, penciled by Chris Schmidt (with cover art supplied by DC artist Joe Phillips), will be available in comic shops, bookstores and various online venues including Amazon, Barnes & Noble and Borders, for the cover price of $3.99. To make sure you get your copy, contact your local comic book store. To find a comic book store near you go to www.comicshoplocator.com or to pre-order it on Amazon click here: https://amzn.to/ieP4Nm
“His innovations command front page news, speculation of his health affects the stock market. Not bad for a college dropout,” said Bluewater president Darren Davis. “His story, and that of Apple, is epic. I’m surprised it took us this long to publish a proper, balanced biography of him.”
According to Bluewater, the impetus to publish the Jobs biography was based on the demand and success of Bluewater’s biography comic featuring Mark Zuckerberg, the founder of Facebook. A graphic novel of the sold out Zuckerberg comic book will be in stores in September and retail for $10.99. To pre-order it on Amazon click here: https://amzn.to/kHobXS
“There are definitely some similarities between Zuckerberg and Jobs. It takes a certain kind of drive and a certain kind of genius to move society the way they have, added Cooke. “The idea behind both efforts is to show the person behind the personality and that it is never what you’d expect.”
Such mainstream media outlets as the Washington Post, The Today Show, Wall Street Journal, New York Times and Forbes Magazine have covered Bluewater’s biography comics. By covering such celebrities and political leaders as Lady Gaga, Angelina Jolie, Sarah Palin