Writer Zeb Wells and artist Clayton Crain are back again with a sequel to their Carnage series.

This time Cletus Kasady takes on the U.S.A.

Read the release and see the other covers for this mini-series after the jump. 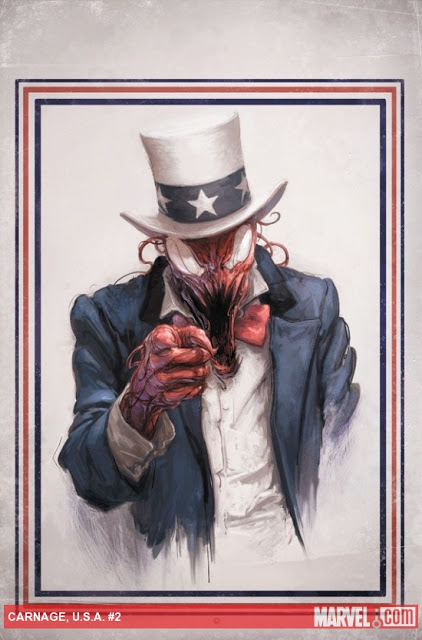 CARNAGE has brought the psychopathic symbiote back to the Marvel Universe in a big way, much to the chagrin of Spider-Man, Iron Man and more than a few others. While the final issue ships next week on Wednesday, June 22, that’s not the last we’ll see of Carnage—in fact, he’s taking the nation by storm!

Writer Zeb Wells and artist Clayton Crain team up once again to deliver a sequel that will have Carnage heeding Manifest Destiny’s call as he leaves the Big Apple behind and brings some of his trademark misery and mayhem westward to Doverton, Colorado in CARNAGE U.S.A., a new limited series beginning this December.

“One of Clayton and my goals was to bring Cletus back to the Marvel Universe and leave him in a place where he could go forward ‘clean’ and cause havoc in other people’s stories,” says Wells. “About halfway through the series I had dinner with [Senior Editor] Steve Wacker and we decided that maybe those ‘other people’ should be Clayton and I. We thought we had a solid hook for another [series], and when Clayton signed on it was a no-brainer. I would never turn down the opportunity to work with Clayton.”

Those who recall the original arc of NEW AVENGERS from back in 2004 know that Carnage got ripped in half by the omnipotent Sentry amid the outbreak at the Raft super villain prison facility and had been presumed dead for quite some time. While it’s common for a new face to take up the mantle of a fallen hero or villain, Wells believes that no other individual could best capture the storied legacy of Carnage. 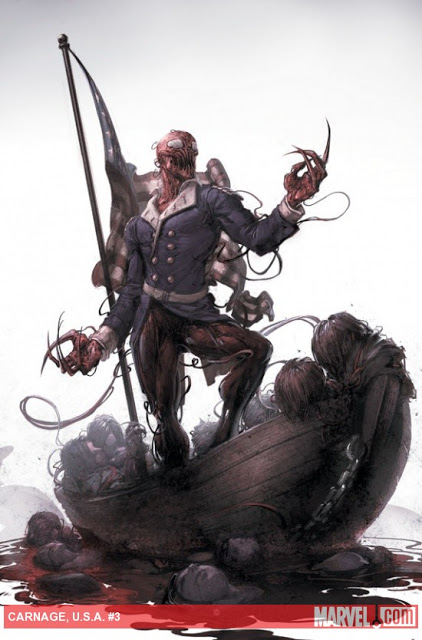 “Editorially there was no mandate for Carnage to be Cletus Kasady when he returned, but for me the Carnage symbiote without Cletus Kasady loses a lot of [appeal],” he explains. “I didn’t want to throw away all the history he had with Spidey and start fresh, so I tried to have my cake and eat it too in the first series by suggesting that Cletus was dead and watching the symbiote destroy someone else’s life before they reunited.”

If there’s anything we know about Carnage, it’s that he loves nothing more than to relish in the pain and suffering of innocent civilians caught in the wake of his mindless destruction. But of all the places to satisfy his bloodlust, why travel to Doverton, Colorado? Wells helped to shed some light on the subject:

As the sequel’s title implies, Colorado won’t be the only state to fall victim to Carnage’s unique brand of mayhem. Not one for subtlety, he’ll be blazing a gruesome trail across the United States.

“Carnage’s attack on America is of national concern, so it’s all hands on deck,” promises Wells. “But it’s soon apparent that even the Avengers’ biggest guns are in over their heads, and it falls to a more specialized group to try and take Kasady down. All symbiotes on deck!”
Those that haven’t picked up the CARNAGE limited series need not worry about feeling lost in regards to the events that have already transpired. True, that CARNAGE U.S.A. may be a sequel, but it can be approached as a stand-alone limited series.

“CARNAGE was concerned with returning Cletus to some sort of status quo, albeit a status quo where he has a four-armed dismembered torso of Spider-Man’s Doppelganger as a pet,” recaps Wells. “If you know what Carnage is all about, and a four-armed dismembered torso of Spider-Man’s Doppelganger isn’t outside your comfort zone, you’ll be good to go. That said, there will be fun nods to the first CARNAGE series and a character or two from that story might show up.”