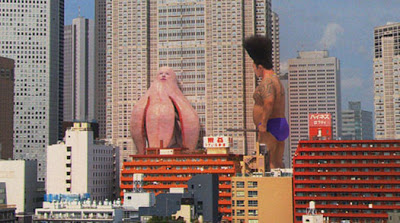 Neal Mortiz’s Original Film, which is currently remaking Total Recall, has struck a deal to remake and possibly develop Big Man Japan as a franchise.  According to The Hollywood Reporter, a script is currently being written by Phil Hay and Matt Mandfredi.

Big Man Japan is a well made, 2007 Japanese mockumentary about a guy who works for the Dept. of Monster Prevention and grows to Godzilla like heights whenever a monster shows up to destroy Japan. The public is not thrilled with him, since he ends up causing a lot of damage in his fights with said monsters.

You can stream “Big Man Japan” via Netflix right now… in HD no less!

Normally I don’t get too excited about remakes but, I have to applaud Columbia for making this move. Big Man Japan is one of the more bat-shit crazy films of the last few years and this is going to be quite a gamble for any mainstream studio.

At a point in time when Hollywood is cranking out tons of needless remakes, Big Man Japan is an inspired choice

Check out the original trailer: