Will Murray is not only an accomplished writer and a world renowned pulp historian, he’s also the literary executor for the estate of Lester Dent, the creator of Doc Savage.

One of the inspirations for Superman, heroic adventurer Doc Savage first appeared in pulp novels in 1933. 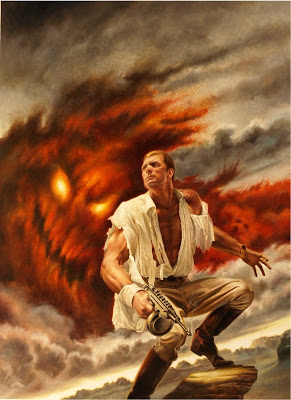 BOSTON, MA—JUNE 14, 2011: Altus Press is excited to announce the launch of The Wild Adventures of Doc Savage, the first in a new series of blockbuster novels starring the legendary pulp superhero in nearly 20 years.

Written by prolific pulp writer Will Murray, who has won acclaim for his unequalled ten-year tenure ghostwriting Warren Murphy and Richard Sapir’s Destroyer action-adventure series, The Wild Adventures of Doc Savage is a continuation of the well-received Doc novels Murray wrote for Bantam Books back in the 1990s, along with the late Lester Dent. The posthumous collaborations will be published under time-honored byline, Kenneth Robeson.

“These new novels are kicked-up, over-the-top exploits of the Man of Bronze, pitting him against forces and foes never before encountered,” promises Murray. “This is not some comic book scripter’s concept of Doc Savage. It’s the real deal.”

Fully authorized by Condé Nast, trademark holder of Doc Savage and based upon unpublished outlines and manuscripts originally written by Lester Dent, the originating writer of the seminal Street & Smith superman, and licensed from the Heirs of Norma Dent, The Wild Adventures of Doc Savage begins with a searing story set in the summer of 1936, The Desert Demons!

“I’ve always had an uncanny knack of writing novels that are more topical when published than when I wrote them,” Murray revealed. “Witness Nick Fury; Agent of S.H.I.E.L.D: Empyre. Published in 2000, it reads like a blueprint for the September 11, 2001 terror attacks on New York City and Washington, D.C., right down to the use of passenger aircraft piloted by terrorists to decimate U.S. cities.

“In The Desert Demons, a rash of unexplainable tornado-like outbreaks wreak havoc in California, calling Doc Savage and his men into action. And what action! Men and machinery are swallowed up by the scarlet cyclones, never to be seen again. Some chapters read like news reports of the Spring of 2011. Let’s hope we have a happy ending in real life! The entire Doc Savage cast is back for this reintroductory episode, including fan-favorite Patricia Savage.”

Murray also reunites with his other Doc Savage collaborator, award-winning artist and sculptor Joe DeVito, who will paint the covers from never-seen photographs of model Steve Holland, who posed for the best-selling James Bama covers as the living embodiment of the Man of Bronze. These vintage photos were donated to the project by Mr. Bama.

DeVito notes, “Working with Doc Savage again might best be described as revisiting old friends: both figuratively and literally. Collaborating with Will Murray, working from classic photos of the late Steve Holland provided by Jim Bama to illustrate the first super hero of them all… I guess I can also describe it as FUN!”

The Desert Demons will be released in July, followed by a second wild exploit, Horror In Gold, by late summer. Seven new novels are planned. Murray promises the familiar characters in their rightful time period, but with a definite edge to them.

“Since I wrote my last Bantam Books Doc,” Murray commented, “a lot of writers have taken a swing at the bronze man, and struck out. It was painful to watch. So Lester Dent and I have come out of semi-retirement to show everyone how Doc Savage is done. With the recent release of Python Isle, the first of my original seven Doc novels to be released as audiobooks by Radioarchives.com, I’m proclaiming this the Summer of Doc Savage. Doc is back. For real this time.”

The Wild Adventures of Doc Savage will be released in a variety of formats:

—6”x9” trade paperbacks which will be available to bookstores and comic shops everywhere, as well as to individual purchasers through the official Wild Adventures of Doc Savage website, www.adventuresinbronze.com.

—6”x9”deluxe hardcovers which will contain an illustrated Afterword detailing the background creation of each novel, as well as bonus articles and biographies by Will Murray and others—available in this edition only. These will also include signed bookplates autographed by Will Murray, artist Joe DeVito, and “Lester Dent” (in facsimile).

—e-book formats available for all the most popular e-readers: Amazon Kindle, Sony Reader, Barnes & Noble Nook, and Apple’s iBookstore (for the iPad and iPhone).