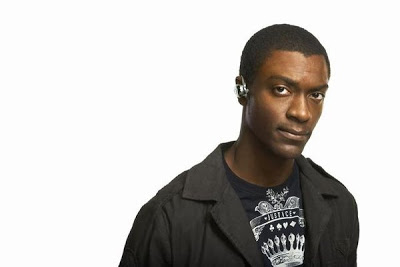 He has also recently had his name come up as a casting possibility (via Entertainment Weekly’s PopWatch column) for baseball legend Jackie Robinson in an upcoming film to be written and directed by Brian Helgeland.

I had the opportunity to chat with Hodge and ask him about the online casting poll which currently has him well in the lead.

FOG!: You know you currently have 43.19% of the vote on the Entertainment Weekly poll.  If given the opportunity, what draws you to portray him?

Aldis Hodge: Well, I actually have no control over the poll side. I think that’s truly just the fan coming out and I didn’t realize that that’s where it was but that’s pretty amazing.

Your next highest competition is almost 18%. You have more than double the second runner up.

That’s awesome. That is freaking awesome. I’ve got to check that out.

So if the producers were looking at this and said, you know what, let’s bring him in to talk about the part, what would draw you to play Jackie Robinson?

Well it’s the fact that Jackie Robinson is such a pioneer in his day.

He had so much going against him in his timeframe.  I think a little bit of that draws me to him and any time that you are that much of – I don’t want to say a martyr but in a sense, he put himself out there in a world that really was saying  “hey, you have no chance. You’re going to fail.”

And he did it. He broke through. He made a change and he contributed so much more to sports and even more to just the way of life and the way people think on a daily basis.

You know, and in the sense of sports he’s like MLK or Malcolm X were to politics.  He pioneered the change and he actually succeeded in doing that. And it was a change for people, not simply just himself. It’s not something that affected him solely. It wasn’t a selfish endeavor. He pioneered a change for people whether he knew he was doing it or not.

So if ever I did get the chance to play such an honorable person, that would be like a dream for me.  Jackie Robinson. Man, that’s the guy.

Now the producers just have to bring you in. If they look at the poll you are by far the favorite.

That’s awesome. Look, tell them I’m in training. I have a softball game tomorrow.

Leverage returns on June 26th at 9|8c on TNT