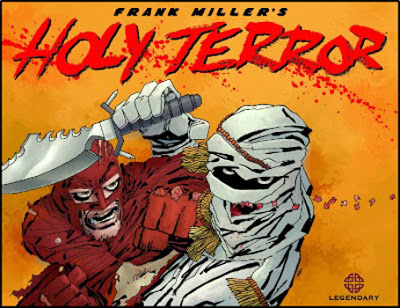 Holy Terror!, Frank Miller’s newest graphic novel, has been in the works for over a decade and will now see release in time for the tenth anniversary of September 11th.

Originally conceived as a project for DC Comics as Holy War, Batman! the concept focused on the Dark Knight facing off against Osama Bin Laden.

The book is now being released through Legendary Comics, which reunites Miller with former editor, Bob Schreck.

According to Miller, “the story will be set in a place called Empire City that, as the name suggests, evokes New York. The landscape and people are fictional but the real-life Al Qaeda will be transferred to this universe with its name, history and mission intact.”

As time went on, Miller decided to make the protagonist his own rather than using the Caped Crusader.

“I had a talk with [former DC president and publisher] Paul Levitz and I said, ‘Look, this isn’t your Batman,’” Miller said. “I pushed Batman as far as he can go and after a while he stops being Batman. My guy carries a couple of guns and is up against an existential threat. He’s not just up against a goofy villain. Ignoring an enemy that’s committed to our annihilation is kind of silly, It just seems that chasing the Riddler around seems silly compared to what’s going on out there. I’ve taken Batman as far as he can go.

“The character is called The Fixer and he’s very much an adventurer who’s been essentially searching for a mission,” Miller said. “He’s been trained as special ops and when his city is attacked all of a sudden all the pieces fall into place and all this training comes into play. He’s been out there fighting crime without really having his heart in it — he does it to keep in shape. He’s very different than Batman in that he’s not a tortured soul. He’s a much more well-adjusted creature even though he happens to shoot 100 people in the course of the story.  It (Holy Terror!) began as my reaction to 9/11 and it was an extremely angry piece of work and as the years have passed by I’ve done movies and I’ve done other things and time has provided some good distance, so it becomes more of a cohesive story as it progresses,” Miller said. “The Fixer has also become his own character in a way I’ve really enjoyed. No one will read this and think, ‘Where’s Batman?‘”

There’s a deadly menace somewhere in Empire City and The Fixer only has until dawn to save his town – and civilization as we know it! Legendary Comics presents an all-out, head-busting, bone-breaking, neck-snapping brawl of a tale from the one of the most celebrated storytellers of the medium, Frank Miller. Years in the making, Holy Terror features a desperate and brutal quest of a hero as he is forced to run down an army of murderous zealots in order to stop a crime against humanity. From the bestselling, critically-acclaimed writer/artist Frank Miller, creator of Sin City, 300, and The Dark Knight Returns.

Holy Terror! is a $29.99 hardcover and is scheduled for a September 14th release.