I’m hard pressed to remember the year I got this piece of artwork….probably around 2000; maybe earlier.

It was definitely at the San Diego Comic Convention. Mr. Darrow had a very large pile of artwork with him, and I probably spent about 20 minutes going through it until I decided upon this particular piece.

This piece really spoke to me because I’ve always been a big fan of Astro Boy, and Rusty was obviously modeled after him.

It is far less “busy” than his usual work, but I like the simplicity of it. It’s also significantly smaller in size than most of his artwork, and therefore less expensive….which was very helpful to my dwindling cash supply.

This was my first time encountering the artist, and I found it interesting that all of his work was on this weird, transparent, oddly textured paper. (While doing research for this article, I realized that it’s vellum….which should have been apparent to me.)

I also thought it admirable that he seemed more intent on recruiting supporters for the charity he was sponsoring rather than discussing his comic book career. He’s on the advisory board for The National Association to Protect Children.

I didn’t spend much time talking to Mr. Darrow, but I came away feeling that he’s a pretty cool guy. Someday I hope to afford one of his over-the-top, manic pieces. 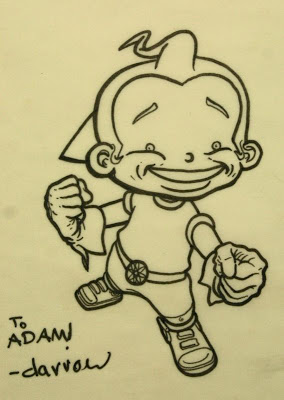