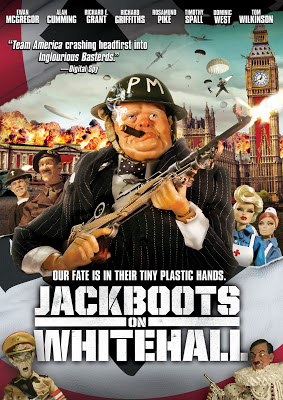 Take Team America and add a generous helping of Inglorious Basterds and you might very well be left with Jackboots On Whitehall.

World War II: What if Nazis seized London and all of England had to band together? When scarily campy Nazi leaders invade by drilling under the English Channel and up through the cobblestones on Whitehall, Churchill leaves his quiet retirement with a cat that looks like Hitler to issue a call to arms from his bunker under Downing Street. Chris, a young farm worker with large hands, rallies the village to fight the good fight — including an alcoholic Vicar, the oldest man in the town, several idiots, a random Frenchman and Bobby Fiske, a swearing American who believes he’s battling Russia.