“Wounds my heart with a monotonous languor.”
Coded message used to alert the French Resistance
On June 6, 1944, Allied Forces landed in Normandy, France.
Their “longest day” actually started the night before, when 24000 British, American, Canadian, and Free French airborne troops dropped into France. At 6:30 AM (GMT +2), 160000 troops landed on the beaches, supported by 197500 naval and merchant navy personnel in over 5000 ships.
“The thing that’s always worried me about being one of the few is the way we keep on getting fewer.”
– Flying Officer David Campbell, RAF (Richard Burton)
I know what you’re thinking: This is a column about movies, not history, and you’re right. Seeing as how my first column appears on Forces of Geek on the 67th anniversary of D-Day, I thought I would write about The Longest Day. 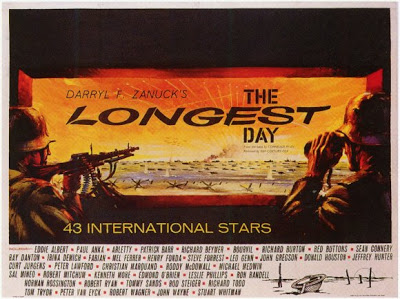 The most unbelievable things in the film are the ones that actually happened.
“Your assignment tonight is strategic. You can’t give the enemy a break. Send him to Hell.”
– Lt. Col. Benjamin Vandervoort, 82nd Airborne (John Wayne)
“John has a long mustache.”
– Coded message used to alert the French Resistance
In 1959, Cornelius Ryan published an oral history of the D-Day landings titled, The Longest Day.
That means that he interviewed hundreds, if not thousands, of people who were directly involved in the invasion, plus read reams and reams of letters, diaries, and official documents. By an odd coincidence, in the early 1980s, I lived in the same town he did and one of his kids rode the same bus to school that I did.
“Well, somebody’s shooting somebody. Let’s us go find this here war.”
– Unidentified Private, 101st Airborne Division
Lessons
“Soon we shall be engaged in battle. To drive the enemy out, we must fire on our homeland. This is the price of liberty. Vive la France!”
–Rear Admiral Jaujard, Free French Navy (Jean Servais)
In 1962, Daryl Zanuck released a movie of the same title. Here are a few lessons you can take away from the movie, and the making of it.
The Piper
“Most of you had your feet wet before – Dunkirk, Dieppe, Norway – and we all know what it means to be driven into the sea. In a few hours, we’re going back, from the sea, and this time we’re going to stay. There’s no time for any sob stuff about England, home, and beauty. But remember our people have had a rough time of it for four and a half years. They’ve earned the final victory. Let’s give it to them. And to our French comrades in arms, I say Bon Chance!”
– Lord Lovat (Peter Lawford), 1st Special Services Brigade
In the film, we catch brief glimpses of a bagpiper accompanying Lord Lovat and his commandoes. The man playing the piper is actually the late Pipe Major Leslie de Laspee who was at the time Pipe Major of the London Scottish Pipe Band, and personal piper to HM the Queen Mother. Daryl F. Zanuck was able to cast such a prestigious piper because the real man, Bill Millin, was an amazing man in his own right. 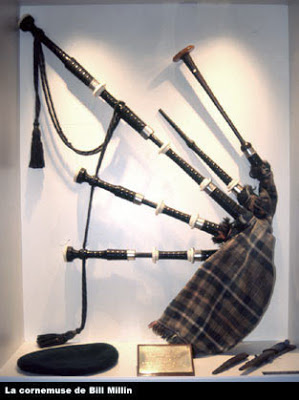 Born in Regina, Canada on 14 July 1922 to a father of Scottish origin who returned to Glasgow as a police officer when William was three, he grew up and went to school in the Shettleston area of the city. He joined the Territorial Army in Fort William, where his family had moved, and played in the pipe bands of the Highland Light Infantry and the Queen’s Own Cameron Highlanders before volunteering as a commando, where he met Brigadier Simon Christopher Joseph Fraser, 15th Lord Lovat and 4th Baron Lovat. Lovat took a liking to Millin, and made the Glaswegian his personal piper.
Millin was the only piper to lead troops on D-Day.
Prime Minister Winston Churchill had specifically forbidden them. The British War Office believed that they would attract sniper fire. His commander, Brigadier Lord Lovat – Simon Fraser, hereditary chief of the Clan Fraser – was a law unto himself. “Ah, but that’s the English War Office, Millin,” Lovat told him. “You and I are both Scottish so that doesn’t apply.” Millin reminisced, “The water was freezing. The next thing I remember is my kilt floating in the water, like a ballerina.” He was the only man during the landing who wore a kilt – it was the same Cameron tartan kilt his dad had worn in Flanders during the Great War – and he was armed only with his pipes and the ceremonial Skean Dhu dirk sheathed inside his right sock. “I didn’t notice I was being shot at. When you’re young, you do things you wouldn’t dream of doing when you’re older.”
“Yeah, it takes an Irishman to really play the pipes.”
– Pvt Flanagan (Sean Connery)
After the war, German soldiers defending Sword Beach said they had not shot him because they thought, “he must have gone off his head.” Other British commandos cheered and waved, Mr. Millin recalled, though he said he felt bad as he marched among ranks of wounded soldiers needing medical help. However, those who survived the landings never complained.
“I shall never forget hearing the skirl of Bill Millin’s pipes,” one of the commandos, Tom Duncan, said. “As well as the pride we felt, it reminded us of home, and why we were fighting there for our lives and those of our loved ones.”
From the beach, Private Millin moved inland with the commandos to relieve British paratroopers who had seized a bridge near the village of Ouistreham that was vital to German attempts to move reinforcements toward the beaches.
It is a moving moment in the film.
British glider troops led by Major John Howard (played by Richard Todd, who actually landed at that bridge with paratroopers reinforcing the glider troops, on D-Day) seized a bridge over the Orne River at Ouistreham (now called Pegasus Bridge). They had been told to “hold until relieved.” They had no idea if the beach landings were successful. They were shelled by mortars and suffered countless German counterattacks. They were less determined than they were resigned. They would hold to the last man. Then, across the bridge, they heard Millin’s pipes. “Black Beer” was the first sign that the landings had succeeded, and that the glider troops and their airborne reinforcements might see home again.
The last tune Millin piped on D-Day was “The Nut-Brown Maiden,” played for a small red-haired French girl who, with her folks cowering behind her, had asked him for music as he passed their farm. He gave the pipes later to the museum at the Pegasus Bridge. He often revisited that bridge, and sometimes piped across it, during his long and quiet post-war career as a mental nurse at Dawlish in Devon. On one such visit, in full Highland rig with his pipes in his arms, he felt a tap on his shoulder. When he turned around, he saw a red-haired woman, who remembered him fondly, and kissed his cheek.
Mr. Millin passed away in August, 2010, at the age of 88. Rest well, sir. I’ll see you at the bar in Fiddler’s Green.
Comments?
The real LTC Vandervoort was miffed that John Wayne played him, since he was only 27 when he dropped into France and the Duke was more than ten years older when he played the part. This is one of the few films in which John Wayne cries on screen. Can you name another one?