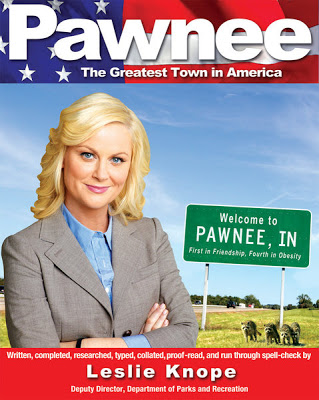 Which is great and all, but I was hoping that The World According to Ron Swanson would be on my bookshelf first.

First Book Based on Hit NBC Series “Parks and Recreation” Will Feature a Hilarious and Historical Tour of Pawnee — Complete with Other Characters’ Commentary, Photographs and Illustrations
Release Hits Bookstores October 4, 2011

NBCUniversal Television Consumer Products Group and Hyperion Books announced today that they will publish “Pawnee: The Greatest Town in America,” a book written from the perspective of show character Leslie Knope (portrayed by Emmy Award nominee Amy Poehler). Knope serves as Deputy Director of the Parks and Recreation department for Pawnee, Indiana on the hit NBC series “Parks and Recreation” (Thursdays, 8:30-9 p.m. ET).

Each chapter will explore a different aspect of the fictional town’s history and expand upon events hinted at in the series, such as: the time the whole town was on fire, its long list of ridiculous town slogans, and the ongoing raccoon infestation. Knope, a resident of Pawnee since her childhood, provides all of the research and comical insights into this Midwestern town that fans have grown to love.

“If you like small towns with big ideas, this book is for you!” said Poehler. “And here’s hoping that Indianapolis will play Pawnee when they turn this book into a movie!”

“The ever-expanding town of Pawnee has become its own character in our show, and we’re thrilled that we got to accelerate that expansion in one giant, goofy 240-page comedy book,” said Mike Schur, co-creator and executive producer of the series. “It’s a complete portrait of Everytown, USA, which every reader — whether a fan of the show or a newbie — can enjoy.”

Of the deal, Hyperion Books editor Matt Inman said, “We are absolutely thrilled to be publishing ‘Pawnee,’ written by some of the most talented writers and actors working in television today. “Pawnee” is an absolutely hilarious look at one of America’s great small towns. Both ‘Parks and Recreation’ and Amy Poehler fans will love it.”

“Parks and Recreation” returns to NBC for its fourth season this fall on Thursdays (8:30-9 p.m. ET).

Hyperion, founded in 1991, publishes general-interest fiction and non-fiction hardcover, trade, and mass-market paperback books for adults, and includes the Voice, Hyperion eBook, and Hyperion Audio imprints. Hyperion is the adult trade book publishing unit of the Disney/ABC-Television Group, which is part of The Walt Disney Company. For further information, please visit www.hyperionbooks.com.

About “Parks and Recreation:”

Leslie’s office mates include Chris Traeger (Rob Lowe, “Brothers & Sisters,” “The West Wing”), a health nut who wants to live to be 150 years old, and Tom Haverford (Aziz Ansari, “Human Giant,” “Scrubs”), a fashion-obsessed wannabe player whose greatest dream is to own his own nightclub. Leslie’s boss, Ron Swanson (Nick Offerman “Children’s Hospital”), hates the very government he works for, and sports one of the most impressive moustaches on primetime television.

“Parks and Recreation” is a production of Deedle-Dee Productions, Fremulon, 3 Arts Entertainment and Universal Media Studios. Along with Daniels and Schur, Howard Klein (“The Office”) and David Miner (“30 Rock”) also serve as executive producers for the series.