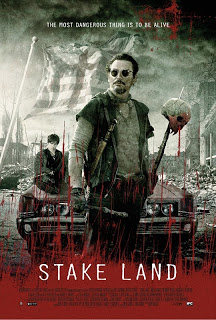 Post-apocalyptic scenarios never used to be inundated with the undead. Take the classics: Soylent Green, Planet of the Apes, The Terminator.

Plenty of unsavory characters who’ve fashioned impressive wardrobes out of leather, your pick of unspeakable acts.

Of late, our dystopian worlds tend to be overrun with the plague-ridden. Whatever killed off the humans and caused the US government to collapse was not nuclear, not alien, but viral, spread one sweet bite at a time.

In the case of Stake Land, blame a vampire epidemic.

Unlike standard animated corpses, who stumble about while comically shedding limbs, these “vamps’’ are more orc-like: buff, agile, growling, with a bad case of ’roid rage. We don’t know where they came from, or what caused the plague, but you don’t want to mess with them.

Still, the standard wooden stake to the heart does the trick. Or twisted and hammered into the sternum. Or jammed into the brain stem. Each type of undead — “vamp,” “scamp” and “berserker” — has its own special way to stop ticking, and “Mister” knows each special way to kill ’em good.

When Stake Land begins, a lone, vampire hunter known only as Mister (Nick Damici, of World Trade Center) saves young Martin (Connor Paolo) just as the baddies kill his parents and munch on his baby sibling. Through spewing black blood, Dad’s last burbling words to Mister are “Save him.” The misanthropic takes Martin under his wing and trains the boy in anti-vamp hand-to-hand combat. There’s a nice scene of the kid waiting in an oversized football helmet and pads, armed with a wooden spear, as Mister unleashes a zombie captured in the trunk of his car expressly for his impromptu boot camp.

The boy deemed ready to kick his own undead butt, together, surrogate son and father cruise northward in a clunky gas guzzler hoping to reach Canada, a.k.a. “New Eden,’’ a promised land where life is supposedly better and the weather’s too cold for the vamps to survive. At night, they chain length of metal fencing to the car’s exterior to protect them as they sleep. Sometimes they stay up at night to lure the zombies with bait like a teddy bear, then pounce. Mister collects teeth from his trophies They pick up a nun, played by a shorn, haggard-looking Kelly McGillis (a long way from her Witness and Top Gun days), a pregnant girl country singer (Danielle Harris), and an Army deserter (Sean Nelson). In the weakest plotline, they must fight off a creepy cult leader (Michael Cerveris) and his burlap-wearing minions.

It seems that in the future, the end of the world has encouraged nihilistic Christian sects — what else is new? — and this cult has a way of air-dropping the undead fodder on the encampments of the living, terrorist-style, much like medieval siege engines hurled plague-ridden carcasses over the ramparts to infect castle residents. There’s also marauding bands of cannibals (though it’s unclear if, taxonomically, they’re undead as well or just hungry).

As in The Road Warrior, a young narrator’s experience is the prism through which we see rape, death, devastation. We watch Martin morph from wide-eyed boy to jaded young man. Damici plays Mister as all brood and no bluster. More of a tight-lipped western drifter than sci-fi action hero, he keeps watch while the others sleep, and utters advice like “One day you’ll learn not to dream at all.” The ultimate coming of age training.

Stake Land has its fight scenes, and they’re shot conventionally, with none of that slow-mo, high-flying acrobatic all in vogue. Here, they action is also secondary. While paying debts to John Carpenter’s Escape from New York and Sam Raimi’s Evil Dead films, director Jim Mickle (Mulberry Street), who wrote the script with Damici, has his own aesthetic, which smartly lingers not on violence but on the silent, poignant details of this desolate world— a ruined factory, an abandoned home the travelers scavenge for food and a place to sleep, a Virgin Mary figurine left on a makeshift grave.

The beautifully bleak vision is enhanced by Ryan Samul’s exquisite cinematography and composer Jeff Grace’s plaintive piano and violin arrangements. In one touching moment, McGillis recognizes that one of the attacking vamps is a fellow sister of the cloth. She winces as the nun is finally laid to rest, but not before the bitch is skewered by a stake.

This doomed world may feel familiar, full of paranoia and desperation, but Stake Land remains one of the genre’s smartest entries in years. As in The Road, our hope hinges on the survival of this makeshift family. Which suggests the hidden purpose of zombie movies: Given these folks’ post-apocalyptic woes, can the recession be all that bad?

Ethan Gilsdorf is the author of the award-winning book Fantasy Freaks and Gaming Geeks: An Epic Quest for Reality Among Role Players, Online Gamers, and Other Dwellers of Imaginary Realms, his travel memoir investigation into fantasy and gaming subcultures the Huffington Post called “part personal odyssey, part medieval mid-life crisis, and part wide-ranging survey of all things freaky and geeky,” National Public Radio described as “Lord of the Rings meets Jack Kerouac’s On the Road” and Wired.com proclaimed, “For anyone who has ever spent time within imaginary realms, the book will speak volumes.” Follow Ethan’s adventures at https://www.fantasyfreaksbook.com.