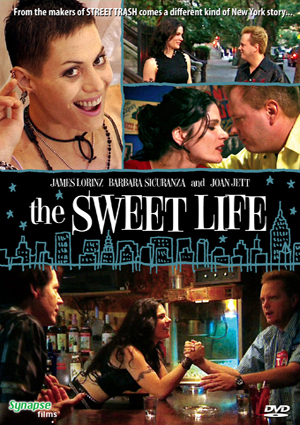 I’m pretty sure that the idea of rocker Joan Jett starring in a romantic comedy pretty much never crossed your mind.

Synapse Films hopes to change that with the release of their film, The Sweet Life, coming this July to DVD.

Joan Jett in her romantic comedy debut, THE SWEET LIFE, from Rocco Simonelli and Roy Frumkes, the co-writers of the cult hit THE SUBSTITUTE, and , the producer of STREET TRASH!

Title song “The Sweet Life” performed by Joan Jett and the Blackhearts!

From THE SUBSTITUTE writers Rocco Simonelli and Roy Frumkes comes this metropolitan tale of big-city romance.

THE SWEET LIFE  is a romantic comedy about two brothers who had nothing in common until an arm-wrestling female bartender took them on.

Sensitive but unsuccessful New York magazine columnist Michael (Jay Lorinz, King of New York, Frankenhooker) looks on while his self-confident and shallow brother Frankie catch all the women and make all the money, and reevaluates his own relationship with his biker-chick roommate, Sherry (Joan Jett).  Through a twist of fate, Michael finds himself vying with Frankie for tough bartender Lila’s affections, and the results are riotously funny and wholly touching.

“The Sweet Life is a fresh, contemporary slant on both the sugar and the vinegar in the sexual rituals of the big-city singles scene that is hilarious, keenly observed, and chock full of refreshing details and insights. Really, a job well done that gives independent filmmaking a good reputation.” – Rex Reed

“What struck me was how quirky the characters were, making The Sweet Life a wonderfully unconventional romantic comedy.” – Wes Craven (Scream, A Nightmare on Elm Street)