There was a film that sprung up around Thanksgiving two years ago on Netflix that had caught my attention.

The film was titled ThanksKilling and it promised to be, at least by its cover art, the ‘Ultimate Low Budget Experience.’

How could I pass by something that promises all of that on Thanksgiving? 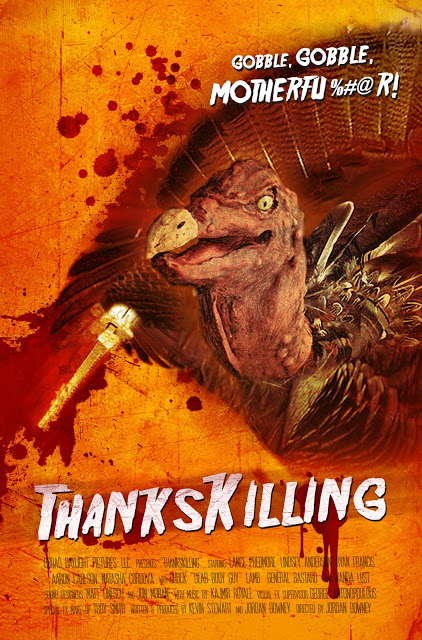 Like a textbook horror film five kids (a jock, a good girl, a slut, a redneck, and a nerd) who would never hang out with each other decide to hang out with each other and climb into a jeep to go home from college during their Thanksgiving break. What they didn’t know was that a killer demonic foul-(or-fowl-)mouthed turkey would be on the loose hunting them down one by one.

It sure does and ThanksKiling surely is.

The movie knows it is an ultra-low-budget film with a killer Turkey puppet hunting down very familiar archetypes. That is what make the film so…incredibly awesome. It was made for under $3,500, shot in 11 days, and made by two college kids in Ohio. The film is very much in on the fun as it is a complete mockery of low budget horror films – including itself.

Suffice to say in the past two years since first watching ThanksKilling I’ve watched the film relgiously, forced friends to sit down and convert them over to the ‘Turkey Side’, and have them, in turn, go out and yell out to everyone how awesomely awesome ThanksKilling is. Like The Room, Troll 2 or Birdemic, ThanksKilling is one of those rare films that needs to be watched mulitple times.

Unlike those films ThanksKilling knew it was in on the joke from the beginning.

ThanksKilling has joked about a sequel right from the very end of the first film where it joked about having ThanksKilling 2: IN SPACE! Because we all know that Hellraiser, Jason, and the Leprechaun were all way cooler in space, right?

Now that news has finally come as the makers of ThanksKilling announced via the ThanksKilling website that a sequel is currently in the pre-production stages and currently looking to fans to help make the sequel come to life.

So I get to help make the sequel to one of the best all-time low budget horror films? Not only can you count me in, I’ll probably need a ride to the pawn shop. 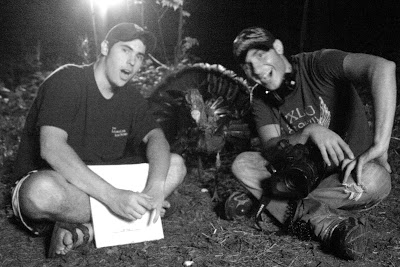 I feel like the luckiest man in the known universe in sitting down with ThanksKilling co-writer Kevin Stewart and co-writer/director Jordan Downey to talk about ThanksKilling, the sequel, and what is coming up next for everyone’s favorite killer turkey. The two have moved on from Ohio to Los Angeles where they both are currently living the dream working in the film industry.

“We talked about doing a sequel for awhile,” they said. “We thought a ThanksKilling sequel is a good stepping stone for what we want to do next.”

I started off asking about the success of ThanksKilling, which has been getting seen more and more thanks to being on available on Netflix, Hulu, and the Playstation store, all the while continuing to grow as a cult film.

“We are literally sitting right here putting together a Netflix report,” Downey said. “We’re gathering numbers ourselves on similar titles that ThanksKilling is rated with and it is in the top 10% of the horror films on Netflix. It continues to grow with about 200 to 300 more views a day on Netflix alone. Around the holiday season it is what pops up most since there’s not alot of other horror films with that Thanksgiving theme.”

“We originally thought about that,” replied Downey. “We looked at the independent financing route or should we try going through a production company – some credible company that could get behind it. We kind of just decided that alot of the “success” of the first one came from us being directly in touch with fans, making the artwork ourselves, distributing ourselves, and getting it out there ourselves. We didn’t want to lose that. It’s an important factor of the story. We didn’t want to get bigger then a killer turkey movie should ever get.”

He continued, “The first one people enjoyed because we were very low budget and we were aware of that. We let the fans in on that whole joke. We don’t want to lose touch with that. We don’t want to get bigger then it ever should have been. Even if we could make ThanksKilling 2 for a lot of money, I don’t think it’s right for this type of movie.”

“We’re both young guys and there’s still alot for us to learn about making an independent film. We learned alot from the first experience and we kind of wanted to go through that again. We weren’t ready to go onto that bigger executive studio type environment. Not that ThanksKilling 2 would have ever been that. We just want to keep it smaller and not let it get out of control.” 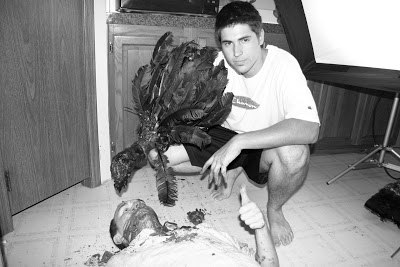 I had noticed that the Kickstarter campaign was starting off a bit slow and asked the guys what they thought about their campaign thus far. “It’s not as good as we thought it was going do at first. We have our fans writing on Facebook or e-mails everyday asking “Where’s the sequel?” “What’s going on with the sequel?”

“So we thought we could get our fans, we have 5,000 right now on our Facebook group and another 4,000 fans on another group, to pre-order the movie which is one of the rewards on the Kickstarter page. It’s $20 and you get ThanksKilling 2 when it comes out. We thought if we could get 5,000 fans to do that we’d have $100,000.” – which is the final amount the duo are hoping to raise for ThanksKilling 2.

“We did think we would have more fans doing that,” Downey said. “So the short answer is it’s not going as great as we want it to. Now we have to change gears and try some different things.”

The best quote of the interview came next when he simply uttered, “The sequel will happen. We will be making this sequel.”

Knowing that they could do much more, the duo have been planning out the rest of the Kickstarter campaign. “We sat down to watch every Kickstarter video we could and many of them are a couple of filmmakers sitting in front of a soundstage and they are pitching to the camera. They can be excrustaingly boring. Our campaign is, like the first film, a mockery of that fundraising aspect. We are going to have The Turkey hijack the Kickstarter campaign. So we are going to introduce a bunch of different stuff.” 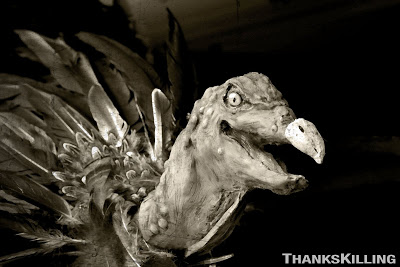 “We’re going to be releasing a press release to all the major media outlets. Thus far we’ve been busy just trying to keep up with getting this information out to our direct fan base that is hasn’t really reached outside of that yet. We’re going to launch this whole crazy campaign that The Turkey has abandoned the project and we are going to try to do a ‘Lost Turkey’ campaign. Get ‘Lost Turkey’ flyers out to every city in the U.S. and just ramp up this campaign not only for the Kickstarter but the sequel as well. Just trying to make this whole thing more comedic and change it all up a bit. Use that viral marketing that we did with the first movie. We have alot of plans to release fake trailers, fake short films, fake reality shows, and fake posters. So you’re never really going to know what is real.”

Since I’m a fan who wants ThanksKilling 2 like…tomorrow…I asked when I, and the rest of the world, will get to see the latest killer turkey masterpiece. “We want to be shooting ideally this fall, but that could be tough,” Downey added. “If the Kickstarter campaign was working better than expected then we would have alot more time on our hands to be working on finishing the script, special effects, production design, and all the different things that will go into it. But because we’ve been spending so much time on just trying to get this campaign off the ground and trying to make it a success we haven’t spent a ton of time on the actual film.”

Downey and Stewart hope to have the film completed for the Thanksgiving 2012 holiday season, looking to first have a limited theatrical release before launching onto Netflix and other various digital distribution methods. For a big fan like me Kickstarter once again comes through with helping artists find success and actually getting something out of it in return. Downey and Stewart are both aware of rabid fans like me and, on the opposite side, those who have never heard of the film before.

“If you’re a fan of the first film you are going to love what comes next because we wouldn’t be doing something unless we thought that it would be up to par with the hilarity of the original. And it’s going to be well worth it (if you donate through Kickstarter) to get a limited-edition autographed copy of the DVD. If you really don’t know anything about the first film, we’re a couple of 25-year-olds who have much bigger dreams within this industry, and right now we’re just trying to have alot of fun making this film. So always trying to help young artists, whether it’s music, art, TV, or movies, we’d always just appreciate the support.”

Learn more about the awesomeness that is ThankKilling by visiting the official website.  As for me, I’ll be going through Grandma’s jewelry deciding on what I can “borrow” to help make this next masterpiece happen.