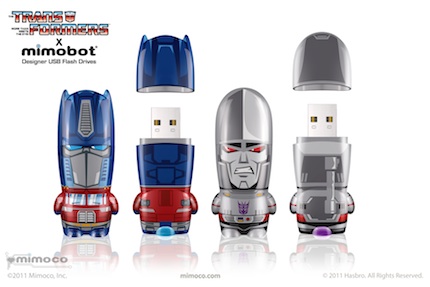 Just in time for the third installment in the Transformers movie franchise, Transformers: Dark Side of the Moon, Mimoco (www.mimoco.com), creator of the MIMOBOT line of designer USB flash drives, and Hasbro, Inc., have just released the new Transformers MIMOBOT flash drive designs. The new collection, shipping next month, consists of Transformers favorites in classic MIMOBOT form: Megatron and Optimus Prime.

Each Transformers MIMOBOT designer USB flash drive comes in a range of 2GB to 16GB memory capacities and is preloaded with MimoDesk™ character-specific content including wallpapers, avatars, screensavers, and other digital extras.

After the jump take a closer look at both drives. 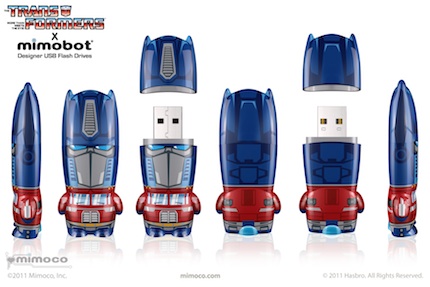 The leader of the AUTOBOTS, OPTIMUS PRIME MIMOBOT® stands heroic with his classic red, white and blue armor and matching helmet. This flash drive’s mission is simple: protect your data from falling into the clutches of the evil leader of the DECEPTICONS, MEGATRON! 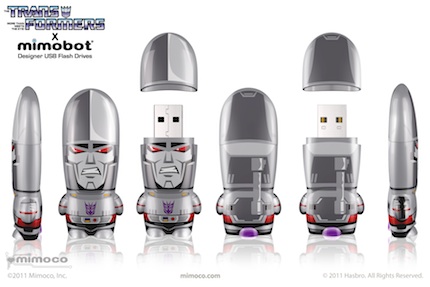 With steel-colored armor, menacing scowl and piercing eyes, the MEGATRON MIMOBOT® boasts classic TRANSFORMERS style and will stop at nothing to gain the Universe’s data, including your documents, music, pictures and more!