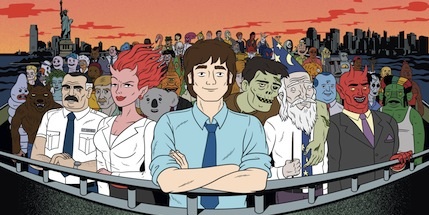 What do you get when you cross a social worker, a zombie, a wizard, a half human/half succubus daughter of the Devil, a Canadian living brain and a giant koala bear that lives as a human?

Take New York City, add every horrifying beast, science-fiction freak and fantasy faerie, shake thoroughly, and you’ve got “Ugly Americans,” an animated series that follows Mark Lilly, a social worker at the Department of Integration, as he helps new citizens both human and “other” adapt to hectic life in the Big Apple.  There are easier tasks than soothing a vengeful mummy, being a slave in Satan’s dark army and trying to circumcise wizards, but Mark proves he’s up to the challenge, even if his co-workers are as incompetent as ever.

Mark’s case load during the second season is heavy as always and his Department of Integration colleagues are less than helpful, including Twayne (Michael-Leon Wooley), a terrorizing demonic bureaucrat; Mark’s succubus co-worker and casual fling Callie Maggotbone (Natasha Leggero), who has some strange ideas about where to take their relationship; Leonard Powers (Randy Pearlstein),   an aging drunken wizard and Mark’s office mate; and Lt. Grimes (Larry Murphy), a law-enforcement officer who despises non-humans.  At least Mark still has his zombie roommate Randall Skeffington (Kurt Metzger), who doesn’t care what Mark does, as long as he covers his half of the rent.

With more monsters than ever before, season two of “Ugly Americans” takes you deeper into the world of an alternate New York City, beginning with the second season premiere on June 30 (“Wet Hot Demonic Summer”).  The premiere features Callie and Twayne plotting to infiltrate a secret wizard compound where Leonard is training his apprentice, but their complicated strategy involves building a summer camp on a moment’s notice.  With Mark as their head counselor, and Randall, Grimes and the DOI crew along for the ride, they soon discover there’s more to this camp than hot chicks and bug juice.

Other second season episodes include Callie getting a younger, hotter sister; Grimes’ Mummy (Christine Baranski) coming back from the grave to nag him; Twayne dealing with an aggressive Drill Sergeant (Rob Riggle) at basic training; and Mark’s old girlfriend (Jenny Slate) coming back into his life.  Throw in a sexually inadequate dragon (Todd Barry) and Mark has got his work cut out for him in this new season full of otherworldly, adventurous fun.

Leading up to the second season premiere, COMEDY CENTRAL Digital will offer fans and newcomers alike access to the world of “Ugly Americans.” COMEDY CENTRAL is featuring seven full episodes from the first season for free streaming, along with previews from season two, including clips, character designs, stills and special insights into the show from the writers, as well as a behind-the-scenes documentary, which will be made available on the show’s site the week of the new season’s premiere.  In addition, fans can follow “Ugly Americans” on Facebook and @UglyAmericans on Twitter.

Later this summer, MTV Networks’ “345 Games” division will release “Ugly Americans: Apocalypseggedon” (available for Xbox LIVE Arcade and PlayStation Network), a four player co-op side-scroller shooter game that features an exclusive script written by the show’s writers – including a new character unique to the game and custom voiceovers from the show’s actors.  Uniting the spirit and humor of the series with addictive game play, players of “Ugly Americans: Apocalypseggedon” will hit the streets to clean up the chaos and prevent the impending apocalypse by resolving case files and fighting otherworldly citizens.
(more)

David M. Stern and Daniel Powell are the executive producers of “Ugly Americans,” which was created by Devin Clark.  Aaron Augenblick and Richard Ferguson-Hull serve as animation directors.  Lisa Leingang and Maura Madden are the executives in charge of production for COMEDY CENTRAL.

Series-creator Devin Clark has been involved with a broad range of television projects including work with HBO, MTV, Nickelodeon, TCM and The Cartoon Network, applying his design and narrative skills to everything from network graphics to traditional cartoons.  His films and animation have been featured in Stash magazine, Animation Block Party, Rooftop Films, Ottawa Film Festival, Platform and Atom Films.

COMEDY CENTRAL, the only all-comedy network, currently is seen in more than 98 million homes nationwide.  COMEDY CENTRAL is owned by, and is a registered trademark of, Comedy Partners, a wholly-owned division of Viacom Inc.’s (NYSE: VIA and VIA.B) MTV Networks.