My hubby and I have been together for six years and are starting to have “The Talk”. You know, the one that involves whether or not we should bring forth our own hell-spawn from the deep caverns of my nether region in an attempt to manipulate and mold this bag of shared DNA into accomplishing all the things that we were too lazy to follow through on.

Not that I am all that interested in doing so…like I said, we are merely talking.

But one thing that we both agree on is that if we do decide to become (shudder) parents our goal will be twofold:

1. To immerse our child in a heavy dose of Geekologie from the moment they come out of my body covered in goo (their birth iPod playlist will include the themes to Star Wars, Super Mario Bros, and, of course, GLaDOS’ haunting rendition of Still Alive) until the day they leave our home either by force or choice.

2. To keep them from embracing idiocy by slamming their heads full of cool science stuff like asteroids, black holes, Star Trek and, of course, sexualizing  theoretical physicists by wallpapering our offspring’s room with pin-up pictures of Michio Kaku…ahhh…Michio Kaku. 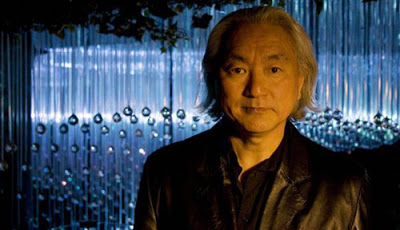 I don’t believe this is going to be too difficult a path to take, especially from two basement-dwelling freaks like ourselves.

(Of course, I’m pretty sure that the cosmos also enjoys an epic practical joke and will fill my belly not with a child that cries at the end of Return of the Jedi like its parents but one who has an unnatural attachment to cheerleading and musical theater, both of which makes me retch).

Now, the reason I am compelled to perhaps take this path of propagating the Geek species is because I have found that over the years those of us who grew up nerdy and unloved for our passions have suddenly become mainstream (not US mind you, just the things we care about) and this faux geekdom is in danger of overtaking all that I love and rendering it stupid.

An example, during Free Comic day a couple of years ago I was wandering through a local comic haven waiting for an auction on some super sweet Buffy the Vampire statuettes to begin when I noticed that a young spiky haired dude was wearing a t-shirt featuring characters from Wet Moon by comic artist and writer Ross Campbell.

A bit of back story: Ross is not only one of the best artists I have ever seen (especially when creating his female characters) he is also a good friend of mine and my husband’s (hubby and him went to art school together and hung out in the same group). So naturally, when I spied a random stranger sporting Ross’ work on his chestical region I felt the need to bond.

So I did what all geeks do in this situation, I smiled at this young whipper-snapper and gestured to his shirt while giving him a thumbs-up, indicating that I approved of his comic artist choice.

He looked down at me and shook his head while his cohort, a skinny chick sporting a too tight ironic Strawberry Shortcake Hot Topic shirt gave me the once over and smirked.

WTF? Was I in the ninth grade all over again?

This is NOT the geek/nerd code of conduct that has served our kind well over the years and allowed us to mingle with one another without the fear of reprisals.

The geek code is clear: when you are in a place of geek worship it is customary to acknowledge your fellow freaks with a nod or handshake in order to announce yourself as a fellow traveler. To rebuff said greeting is akin to disgracing yourself in a foreign country by Not eating the monkey brains your host has presented you…meaning you could/should be killed immediately.

And this incident was merely the beginning of the backslide of True Geekdom.

In my experience a Real Dork is someone who answers all questions like this:

Questioner: Do you know that Star Trek: The Next Generation episode where….

A real geek doesn’t even need the questioner to continue with the question…the answer is always the same: Yes I know it like the back of my hand, I even know all the episodes where Data speaks in contractions even though, as an android, he “is not” supposed to.

And yet today’s geek is buffed and gelled to a high sheen, clad in pre-cracked variant cover comic t-shirts with only a surface knowledge of what was once sacred to the rest of us.

As one of my friends who shall remain nameless as he makes his living off of these types has told me in the deep dark of night, “Just because you own the graphic novel doesn’t mean you understand the comic”.

Translation: If you haven’t waited for months for a comic to rest in your box at a comic shop because the writer and/or artist can’t make a deadline and you feel sick because you feel you are losing the passion of the storyline then you can’t possibly understand what it means to be a geek.

And the fact that is, more and more graphic novel compilation appreciators are taking over the lifestyle rather than those of us that spend years tracking down missing issues of Nightbreed that they accidentally left at an ex-boyfriend’s house without realizing it.

For Christ sake, when a hot chick gets a gig hosting a show about video games all because she sent in a picture of herself licking a PSP rather than someone who spent sixteen hours straight trying to beat River Raid on the Atari 2600, the world needs to reboot itself.

And that, my friends, is why I am considering fornicating without protection.

Because I don’t want to wake up one day and overhear some purposely attractive dude with an X-men symbol tattoo on his wrist talk about the undertones of racial discord on the show M.A.N.T.I.S when we all know that it was just a cool short-lived program by Sam Rami about a paralyzed guy who could only walk when he was strapped into his superpower exoskeleton.

For the love of all things Star Warsian, I would rather participate in a violent vocalization at a pancake house over the coolness/lameness of Captain Planet that ends in a fistfight because the two fried-onion smelling factions came to an impasse, than spend two seconds with someone who did not come out of the theater on May 19, 1999 crying hysterically (and if you know what I’m talking about then you are one of the chosen people) .

Now hand me that bottle of Jeremiah Weed Sweet Tea Vodka, cause if I’m gonna do this, I need to be blotto.

In this article:Geek Love, Nostalgia