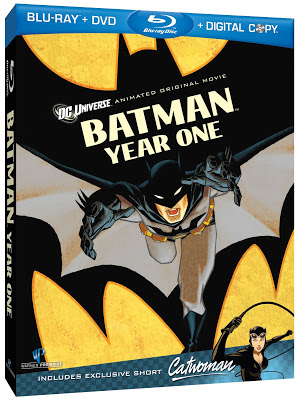 It doesn’t debut until October 18th, but SDCC attendees will have the first opportunity to see the latest DC Universe animated movie before anyone else.

After the jump check out the complete press release for the upcoming release.

Batman: Year One is based on the landmark 1987 DC Comics titles from 12-time Eisner Award winner Frank Miller and illustrator David Mazzucchelli. The film depicts young Bruce Wayne’s return to Gotham City in his first attempts to fight injustice as a costumed vigilante. The playboy billionaire chooses the guise of a giant bat to combat crime, creates an early bond with a young Lieutenant James Gordon (who is already battling corruption from inside the police department), inadvertently plays a role in the birth of Catwoman, and helps to bring down a crooked political system that infests Gotham.

Batman: Year One Blu-ray™ Combo Pack has almost 3 hours of exciting content, including:

Featurette –“Heart of Vengeance: Returning Batman to His Roots”: “The Dark Knight Returns” provided the denouement of Batman’s life. Frank Miller’s next seminal work would provide his near-mythic origin in “Batman: Year One.” This documentary uncovers the contemporary genius of Miller and the audience that was poised to appreciate the depths of his work.

Featurette –“Conversations with DC Comics”: The Batman creative team at DC Entertainment discusses the personal influence of “Batman: Year One” on their  careers. Batman producer Michael Uslan leads the chat amongst well-known writers, editors and artists of the Batman lore, focusing their dialogue on the darker, realistic interpretation of Batman’s origins by Frank Miller and David Mazzucchelli

Standard and high definition versions of the feature film