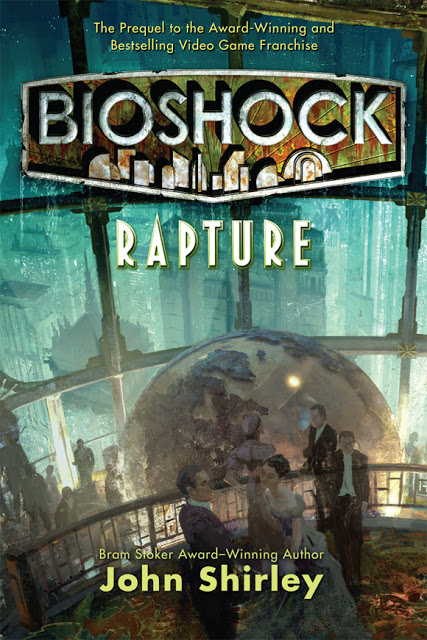 Yesterday, Tor Books published a prequel novel to the video game BioShock, and author John Shirley will be appearing later this week at San Diego Comic-Con, appearing on the “Writing in Videogames” panel on Friday, July 22nd from 10 AM to 11 AM (Room 32AB) and will be signing free giveaway copies of BIOSHOCK: RAPTURE at the Tor Books booth (#2707) from 12 PM to 1 PM.

BioShock prequel novel in-stores 7/19!
BIOSHOCK: RAPTURE
Tor Books, an imprint of Tom Doherty Associates, LLC—the largest publisher of science fiction in the world— announced the publication of BioShock: Rapture by John Shirley (A Tor Trade Paperback; $14.99; July 19, 2011), the first novel based on the best-selling, critically acclaimed “BioShock” video game franchise.  BioShock: Rapture is available at retailers nationwide.
BioShock: Rapture tells the story of Andrew Ryan, a great dreamer with a vision: a utopia free from government, censorship, and moral restrictions on science – where great men and women can get what they give.  So begins the origin story of Rapture – the majestic, shining city beneath the sea, an underwater utopia…destined to suffer great tragedy. This is the story of how it all came to be, and how it all ended.
John Shirley is the Bram Stoker Award-winning author of Black Butterflies and cyberpunk classics City Come A-Walkin’, Eclipse, and Black Glass. He also famously penned the script of the acclaimed dark noir classic film The Crow, along with other film and TV projects.  Shirley’s terrifying and inventive stories range across the same dark, dystopian, and imaginative thematic landscape as the acclaimed BioShock franchise, making him the perfect fit for this project.
Originally launched in 2007, the first BioShock game was lauded as one of the most unique original properties on modern consoles and took home a number of major industry awards, including “Game of the Year” from BAFTA, GamePro, X-Play, and the Spike TV Video Awards.  The critically acclaimed cross-platform follow-up, BioShock 2, came out in 2010. The eagerly anticipated third entry in the franchise, BioShock Infinite, which won 39 awards for “Game of Show” at E3 2011, is currently in development.
About Tor Books

Tor Books, an imprint of Tom Doherty Associates, LLC, is a New York-based publisher of hardcover and softcover books. Founded in 1980, Tor annually publishes what is arguably the largest and most diverse line of science fiction and fantasy ever produced by a single English-language publisher.  In 2002, Tor launched Starscape, an imprint dedicated to publishing quality science fiction and fantasy for young readers, including books by critically acclaimed and award winning authors such as Cory Doctorow, Orson Scott Card, and David Lubar. Between an extensive hardcover and trade-softcover line, an Orb backlist program, and a stronghold in mass-market paperbacks, books from Tor have won every major award in the SF and fantasy fields, and has been named Best Publisher 24 years in a row in the Locus Poll, the largest consumer poll in SF.