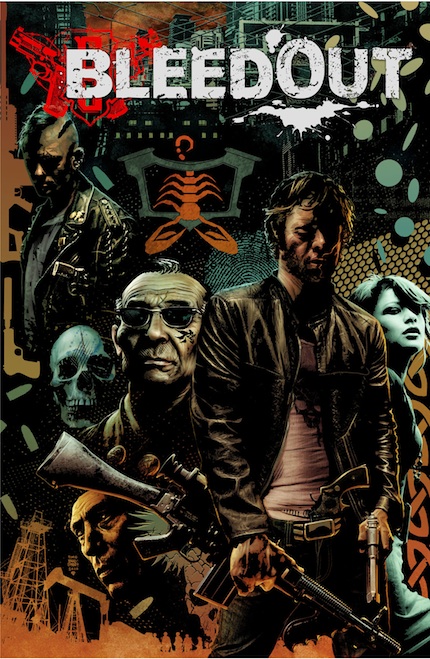 Mike Kennedy is writing and directing 10 webisodes that expand on the stories presented in the Bleedout graphic novel, in stores this week.

Archaia Entertainment and Vogster Entertainment Debut Exclusive Webisode Series At San Diego Comic Con for Bleedout
SAN DIEGO (July 18, 2011) – Publisher Archaia Entertainment is adding another layer to their digital offerings by hosting the worldwide debut of 10 original graphic webisodes centered on their latest graphic novel, Bleedout.  The webisode series is set to launch on Wednesday, July 20, opening day of the 2011 San Diego Comic Con.
Based on the expansion to the Massively Multiplayer Online shooter, CRIMECRAFT, from Vogster Entertainment, Bleedout tells the frighteningly plausible tale of a world destroyed by its own greed and shortsightedness. When every oil well on the planet mysteriously runs dry, utterly dissolving the cornerstone of modern civilization, global economies wither and nations fall like bone-dry dominoes, including the seemingly impervious United States. Caught in a zenith of chaos, Sunrise City now lies in the hands of a criminal cabal who may or may not hold the key to the future… and the secrets behind the planet’s tragic ruin.
The deluxe hardcover graphic novel, which also hits store shelves on July 20th, collects chapters from some of the comic industry’s hottest superstars, including Nathan Fox, Zach Howard, Sanford Greene, David Williams, Ben Templesmith, Gary Erskine, Howard Chaykin, Glenn Fabry, Vince Proce, and Trevor Hairsine, with cover art by Tim Bradstreet. Written by Mike Kennedy, this graphic novel presents the world of Bleedout in all of its grim, pulp noir glory, with page after page of supplemental graphic and story material that further explores this tragic future, and the frighteningly familiar current events that lead there in the first place.
The webisodes will go even deeper into Bleedout’s ambitious storyline, taking fans on a visual whirlwind tour through the graphic novel’s gritty and frightening world. The short films, written and directed by creator, Mike Kennedy, feature high-quality animation illustrated by the same stellar line up of artists featured in the book. The webisodes also feature original music by industrial legend Jason Novak of Cracknation, and narration by animation veteran Tom Fahn.
After the July 20 debut, new episodes will roll out every day leading to the dramatic conclusion on Saturday July 30. A sneak-peek can be checked out at https://vimeo.com/channels/bleedout.
Archaia will host several signings at this year’s San Diego Comic-Con to celebrate the launch of this exciting new book and webisode series, with featured signings by artists Tim Bradstreet, Nathan Fox, and Sanford Greee, as well as author Mike Kennedy.  Vogster will be distributing a limited run of free CRIMECRAFT game discs at each signing as well.
About Archaia Entertainment:

Archaia is a multi-award-winning graphic novel publisher with more than 50 renowned ongoing and stand-alone titles, including such domestic and international hits as Mouse Guard, Return of the Dapper Men, Gunnerkrigg Court, Awakening, The Killer, Okko, The Secret History, Tumor, Artesia, The Engineer, and a graphic novel line for The Jim Henson Company.  Archaia has built an unparalleled reputation for publishing innovative, imaginative, and indelible stories, building one of the industry’s most visually stunning and eclectic slates of graphic novels. Archaia was named Graphic Novel Publisher of the Year according to Ain’t it Cool News, Graphic Policy, and Comic Related, and was honored with nine 2011 Eisner Awards nominations. Archaia has also successfully emerged as a prolific storyteller in all facets of the entertainment industry, extending its popular titles into film, television, gaming, and digital media.