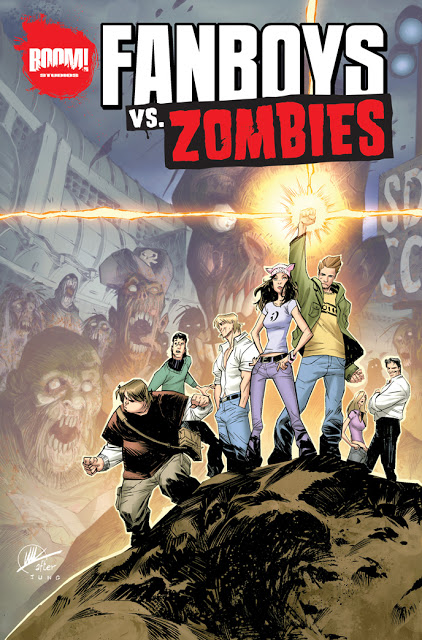 Boom! Studios has announced Fanboys Vs. Zombies which is the invention of Ben Silverman, the ousted former co-chairman of NBC, now CEO and founder of multimedia studio Electus.

Should be interesting as Silverman has unlikely ever read a comic book or seen a zombie film on purpose.

They read too many comics, watch too much sci-fi, and stammer when they talk to the ladies but only one group of friends can save Comic-Con International from the clutches of the undead as award-winning graphic novel publisher BOOM! Studios brings you the hilariously epic FANBOYS VS. ZOMBIES, originally conceived by Emmy and Golden Globe Award-winning producer Ben Silverman (The Office, Ugly Betty), CEO and founder of multimedia studio Electus, and Jimmy Fox, Head of Creative Development for Electus.

“BOOM!’s planning some major mayhem and lots of laughs with FVZ.” says BOOM! Studios Editor-in-Chief Matt Gagnon. “FANBOYS VS. ZOMBIES aims to put all those survival theories to the test and give readers some ideas for their own zombie apocalypse contingency plan. Be sure to read this book with someone you want to survive the zombie invasion with!”

They’ve been called geeks, nerds, and social outcasts, but when a group of fanboys take their annual trip to Comic-Con International they’ll find one of their greatest nightmares turned reality as San Diego becomes zombie ground zero. Armed only with the undead know-how they’ve gained from comic books, video games and horror movies, it’s up to one group of friends to navigate the Comic-Con feeding frenzy, and make it out alive! But will the zombie hordes be deadlier than they ever imagined? Can they save their friends along the way, and still make it out with some Comic-Con exclusives? Find out when the dead rise at Comic-Con International in the chilling and side-splitting epic, FANBOYS VS. ZOMBIES!

“Trust me when I say you’ll never look at Comic-Con or zombie stories the same way again once you feast your eyes on this gory and hilarious masterpiece,” said BOOM! Studios Marketing and Sales Director Chip Mosher. “BOOM!’s first book, back in the day, was ZOMBIE TALES – the company has been built on horror and humor comics. No one does zombies like BOOM! Studios!”

“BOOM! Studios is the ideal partner for this initiative as no one understands what serves this audience better than they do,” said Jimmy Fox, Head of Creative Development for Electus. “We wanted to create this for the real fans. The comic book junkies, the sci-fi nuts, the horror enthusiasts, the hardcore gamers – every one of them will be represented in our cast of characters. This is for any fan who has ever wondered what would happen if they had to play the role of the hero.”