Writer Chris Roberson, who is quickly becoming one of comic’s best kept secrets might see all that change in February with the release of his new series Memorial, illustrated by Rich Ellis and published by IDW.

Roberson describes the series as, “Memorial is a kind of cross between Doctor Who and Sandman by way of Miyazaki. A comic about memory and magic, mythology and mystery.”

Press release and interior page after the jump. 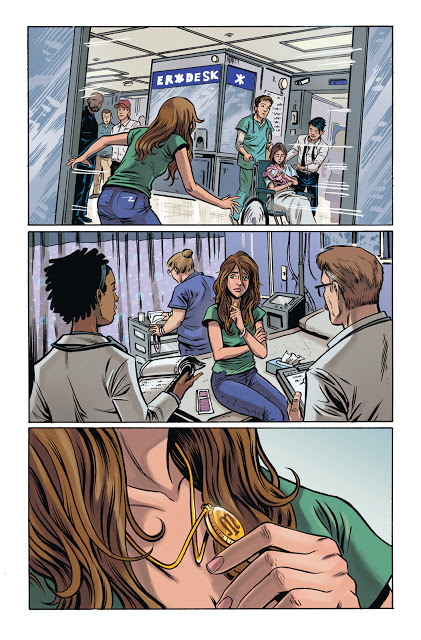 “Memorial,” Roberson says, “is a kind of cross between Doctor Who and Sandman by way of Miyazaki. A comic about memory and magic, mythology and mystery.”

MEMORIAL is the story of Em, a young woman who arrives at a hospital in Portland, Oregon with no memory of her past. A year later, she has managed to rebuild her life, finding a job and friends, when her existence is thrown into turmoil after she inherits a magical shop, the kind that appears in an alley one instant and disappears the next. Em finds herself drawn into a supernatural conflict between immortal beings representing the fundamental aspects of the universe itself.  All of existence is at stake, and the only things standing in the way of total oblivion are Em, the magical shop, and a talking cat.

Comic veteran Roberson has received two Eisner Award nominations this year for Best Limited Series (Cinderella: From Fabeltown with Love) and Best New Series (iZombie.) Roberson will be attending San Diego Comic-Con, and is featured in the IDW Panel taking place on Thursday from 3:00 PM – 4:00 PM in Room 9. Stay tuned, as an exciting announcement will be revealed during the panel. He will also be signing at the IDW booth #2643 on Friday between 1 – 2 PM.

About IDW Publishing
IDW is an award-winning publisher of comic books, graphic novels and trade paperbacks, based in San Diego, California. Renowned for its diverse catalog of licensed and independent titles, IDW publishes some of the most successful and popular titles in the industry, including: Hasbro’s The TRANSFORMERS and G.I. JOE, Paramount’s Star Trek; HBO’s True Blood; the BBC’s DOCTOR WHO; Toho’s Godzilla; Sony’s Ghostbusters; and comics and trade collections based on novels by worldwide bestselling author, James Patterson. IDW is also home to the Library of American Comics imprint, which publishes classic comic reprints; Yoe! Books, a partnership with Yoe! Studio; and is the print publisher for EA Comics.