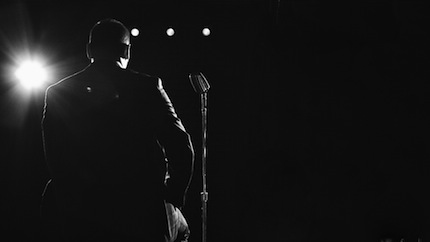 Steve Mazan is a stand-up comedian.

He’s currently battling liver cancer and is pursuing his goal to appear on The Late Show With David Letterman.

Now, there’s a chance that he might wind up with an Oscar nomination as he’s the subject of a documentary, Dying to do Letterman, focusing on both his health and his dream.

And hopefully, he’ll perform on Dave and sit down for a chat sometime soon.

“Dying to do Letterman,” joins the stellar line-up of 17 feature films for the International Documentary Association’s DocuWeeks 2011 with a theatrical release in New York City August 26th to September 1st and in Los Angeles September 2nd to September 8th. “Dying to do Letterman,” is a festival award-winning independent documentary that tells the story of stand-up comedian Steve Mazan’s quest to beat cancer and achieve his lifelong dream of performing on “The Late Show with David Letterman.” This inspiring documentary feature film is directed and produced by the wife and husband filmmaking team of Joke Fincioen and Biagio Messina under their Joke Productions, Inc. banner and will be the first Kickstarter project to raise funds to qualify for Academy Award® consideration.

The selection for the prestigious DocuWeeks, which provides one-week theatrical runs as well as advertising and publicity support, will allow “Dying to do Letterman” to meet the requirements for consideration for the 84th Academy Awards®.

“Being selected for DocuWeeks is a dream come true,” said comedian and subject of “Dying to do Letterman” Steve Mazan. “When we embarked on this journey, we told ourselves we would be happy just spreading a positive message to people affected by cancer. But to receive this level of recognition and to even be in a position of consideration for the Oscars is beyond our wildest dreams.”

“Dying to do Letterman” starts in 2005 when then 34-year-old Mazan learns he has incurable liver cancer and may only have five years to live. Facing seemingly insurmountable odds, Mazan decides it’s time to dedicate himself full time to the dream he’s held since we was 12 years old – performing stand-up comedy on “The Late Show with David Letterman.” Filmmakers Joke Fincioen and Biagio Messina, follow Mazan through the ups and downs of his five-year journey to perform on Letterman.

From the start, we never wanted to make a depressing cancer movie,” said Biagio, who along with Joke produced, directed, and edited the documentary. The duo also filmed much of the footage themselves.

“Steve’s an amazing guy, and continues to make us laugh and inspire us every day,” Joke said. “We felt the tone of documentary should reflect the guy we know; someone who finds a way to laugh at life’s struggles, including cancer.”

That tone is established early in the film, as Mazan’s “Top Ten Benefits of Catching Cancer” list and much of his stand-up are featured.

Making the film was a six-year process with Joke and Biagio filming for five years, editing for one year, all while putting their life savings into making the film.

“Nobody wanted to fund this documentary,” Joke said, “especially since no one knew if Steve would get on Letterman, or if his health would hold out through his quest. But we believed in Steve and his message that ‘it’s never too late to chase your dreams.’ To have DocuWeeks shine a light on his amazing journey means the world to us.”

Many Kickstarter projects focus on raising funds to make a movie, but filmmakers Joke and Biagio funded the film themselves and finished it before asking for any money to expand the reach of this film and it’s message. While Kickstarter forbids any type of charity fundraising on the site itself, the filmmakers plan to do plenty of charity screenings and comedy shows at hospitals and for cancer patients — much like this comedy benefit show they put together for The Canary Foundation which also featured acclaimed actor Michael Rooker (AMC’s “The Walking Dead,” “JFK”)

For more information about events scheduled around the DocuWeeks 2011 screenings of “Dying to do Letterman” in New York and Los Angeles, and to make a contribution to the Kickstarter campaign please visit www.DyingToDoLetterman.com