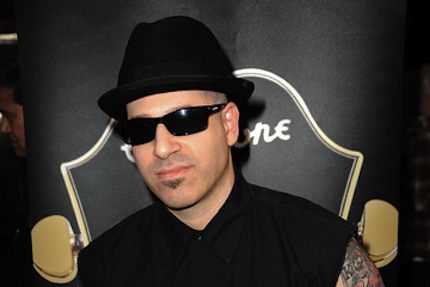 Alan Robert is a busy guy.

He’s known for being not only the bassist and creative force behind the respected hard rock group, Life of Agony, but also as the the creator of the Wire Hangers comic series, with a film now in development.

Tomorrow sees the release of his latest comic, Crawl To Me, which Alan created, wrote and illustrated.

The busy man took a few minutes to chat with FOG! about his latest project.

How would you describe Crawl To Me?

Crawl To Me is a dark, psychological thriller that mixes elements of horror, suspense and the supernatural to tell its story. In the opening pages of issue #1, we meet Ryan Shelby, who seems normal enough at first, but by the end of it we realize that something just isn’t right. The story is set in an isolated country town, during the frigid winter months. Ryan and his young family move into a creepy, old house where disturbing situations occur. These events trigger a heightened sense of madness within the characters. Clues are dropped throughout the series that shine light on what the possible root of these issues could be. But, the book builds to a climactic twist ending that will shock you.

I moved out of the city last year into a home in the sticks, so I had my own real experiences living in an old house. The place has an unfinished basement, complete with a creepy-ass crawl space. I admit, it kinda freaked me out at first. I suppose that was the spark that got me thinking about Crawl To Me.

The story came to me rather quickly at the end of last year and I signed a publishing deal with IDW in January 2011. This will be my second comic series with them. Last year, they published my “Wire Hangers” series, which was an awesome experience all around. I’d been fleshing out that plot for many years before I pitched it to publishers. I was lucky enough to land a deal with IDW, who is my all-time favorite comics publisher out there.

We’re now in the beginning stages of developing Wire Hangers into a feature film. It’s been a wild ride so far!

When I was a kid, my Dad shared his Silver Age comics with me. So, I was reading comics like Spider-Man, Fantastic Four, and Detective Comics all throughout my childhood. In my teenage years, I started collecting my own comics, which ranged from everything from Eastman & Laird’s Teenage Mutant Ninja Turtles (the gritty & violent black & white comics), The MAXX, and of course, The Punisher by Mike Zeck.

I’d go to the NY comic conventions and meet the artists and get my books signed. I loved the whole experience. In the last bunch of years, I really got into the more non-traditional looking comics, from artists Dave McKean, Alex Maleev, Ben Templesmith, Ashley Wood and Brett Weldele.

Check out a sneak peak of the book below, in stores tomorrow.