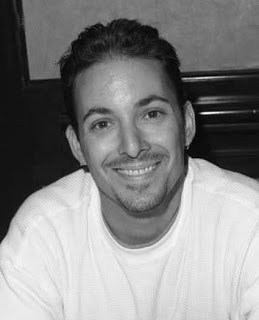 Noah Hathaway started acting in commercials when he was three years old, officially starting his career.  As a child actor he appeared on Battlestar Galactica as Boxey (who famously had a robot dog named Daggit) and made guest appearances on such series as Mork & Mindy, Eight is Enough, Laverne & Shirley and CHiPs before playing his second iconic part at age thirteen as Atreyu in The Neverending Story.

More television and movie work followed until Hathaway left the business for the most part in the late Eighties and pursued other interests.  Now, he’s returning to acting, co-starring in Sushi Girl with an ensemble that includes Mark Hamill, Tony Todd, Michael Biehn, James Duval, Sonny Chiba, Danny Trejo and Jeff Fahey.

Noah was generous enough to take some time to chat with FOG! regarding his current work as well as work from the past.

Sushi Girl is your return to acting after over a decade.  Was it this specific project that lured you back?

Well, you know it was the project, but who was in the project more initially than the project itself.  I got a Facebook message from one of the producers and it was “hey would you be interested in doing a movie with Sonny Chiba, Mark Hamill, Tony Todd and dot dot dot.  And how do you say no to something like that?  I had kind of been toying with the idea of going back to work anyway and the timing was perfect.

What’s the movie about?  It’s a bit cryptic even in the trailer.

Well, that’s on purpose; we don’t want to give away too much of it.  It’s a throwback to grindhouse; gritty, violent, sexy; like so many of those awesome old Seventies movies.  It’s about a group of diamond thieves.

I play a character named Fish and he gets nabbed by the cops and he does six years for these guys and upon his release they pick him up and they have this night in store for him and it just goes really wrong for Fish.  That’s what I can tell you.  It’s on the edge of your seat and you’ll be gritting your teeth with fear.

You started really young as a child actor and wound up with two memorable roles, Boxey on Battlestar Galactica and as Atreyo in The Neverending Story.  What were those experiences like?

Well Battlestar was my first big job, I had been doing commercials for two or three years before that.  Battlestar was great, I was a kid in the candy store.

You got to play with a monkey in a dog suit, that’s pretty cool. 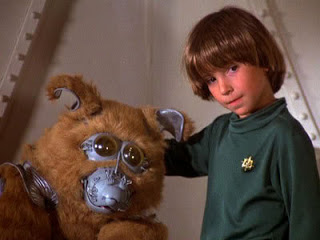 Yeah, I mean how many six years olds have their own chimpanzee to hang out with all day?  You don’t really pay much attention to the adults.  Lorne Greene was awesome, but for me it was all about the guns and the Cylons and my little chimp.  So that got me going and got me prepared for the rest of the career.

I then probably did every tv show in the late Seventies and Eighties.

The Neverending Story was supposed to be a three month shoot and it turned into close to a year.

I read that you had to do a number of harrowing stunts on that film. 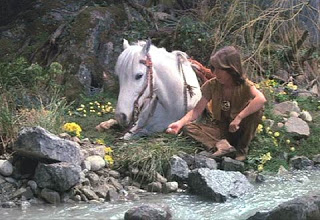 Yeah, they beat the hell out of me on that movie.

Thank God kids are resilient, because they did a number on me.  It was just physical.  You had the horseback riding and all.  Wolfgang Peterson is a very realistic director and so he wanted me to do as much as humanly possible and you get hurt; but it was a whole lot of fun, too.  Even though I worked my ass off it was like play-time every day.

You were also the first on screen Harry Potter back in 1986’s Troll.


Child stars kind of get a bum rap, as you grew up was it tough to find work as you got into your teens?  Were you typecast in the industry?

No, I guess I just got lucky.  I never felt as if I was typecast.  Maybe it was that I kind of got out of the business in my early twenties, maybe before that was able to happen.  I’ve always seen myself as more of a character actor anyways; I’ll put on thirty pounds or I’ll shave my hair, so I was never too worried about that.

But, a lot of them do. I grew up with most of them.


Your interests are also pretty eclectic. You’ve studied and taught martial art and dance, you build and design custom choppers and opened a tattoo parlor.  Do you find that your artistic side when you hadn’t been acting has been fulfilled by these other interests?

The funny thing with that is I just like to try and keep busy, but for the last almost twenty years my artistic creativity  hasn’t been fulfilled nearly what I would like, so that was kind of why I had been thinking about and toying with the idea of going back to work.  When you’re an artist, you’re always an artist and you have to create art.  Tattooing is nice and building things is nice, but what I really do is I’m an actor.  So, now that I’m back and working again, in retrospect I go, “wow this is what I’m supposed to be doing; this is what makes me happy”.  Not that I don’t love to tattoo and do everything else I do, but it’s just not nearly as fulfilling as what I really should be doing, which is be an actor.

You have an amazing cast to come back to.

I got to tell you it was better than you can imagine.

When you make a movie, everyone gets really close and then, in my experience, when you wrap everyone goes their own direction, their own separate ways and you might not ever see anyone again or it might be five years before you hang out again.  We hang out every week still and we’ve been wrapped for a couple of months.  Two or three times a week we’re either at a barbeque or at somebody’s house hanging out.  It turned into this really awesome thing.  Everybody always says, “we love our movie family”, and usually it’s bullshit, but we really do.  We spend a lot of time together still and everybody vibed out really well.  There’s no ego, everyone wanted this to be great and be awesome, so everyone gave as much as they could.  Nobody was trying to get their close-up or get their line above anyone else.  It worked out awesome.

I couldn’t have hoped for anything better for a comeback movie.

I did a little arthouse movie with James Duval called The Critic and I’m writing something for myself and we have a couple people we’re talking about other projects.  I’m just diving in with both feet.  I’ve only been back in Los Angeles four months now.  I’m just rip-roaring to go.

When can we see Sushi Girl?

We’re hoping for a theatrical release, and I think we have a strong enough project to  get that.