The Good, The Bad and The Ugly is, besides The Searchers, the most epic and sweeping of the Westerns I have sat down with so far.

Or at least it seems to be.

The Searchers told the tale of a haunted man on a quest that spanned years and a continent. The Good, The Bad and The Ugly is a simple story about three men and a stash of Confederate gold.

There’s nothing inherently epic about a fistful of mercenaries gunning for a few dollars more, but how Sergio Leone gets them there is what gives the movie it’s unexpected scope. 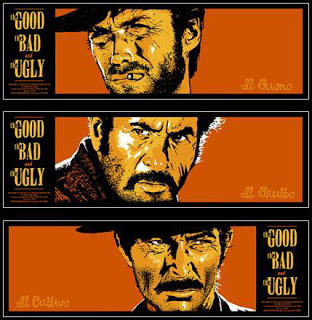 This was not my first time with The Good, The Bad and The Ugly.

Years ago a friend had picked up a newly packaged special edition on DVD and called a few of us over to watch it. Like so much of what I’ve watched for this column it was something I was aware of in a very superficial sense. I knew that it was a Spaghetti Western and with that would come a bad, Godzilla movie-esque overdub. I knew the theme song because it had become a pop culture hallmark; it wasn’t just the theme for The Good, The Bad and The Ugly, it was the way all Westerns sounded.

Lastly I knew that Clint Eastwood was in it.

Truth be told, I hadn’t seen an Eastwood Western before first seeing The Good, The Bad and The Ugly, but the image of The Man With No Name is as iconic as the film’s score. If I wasn’t picturing The Duke in his ten-gallon hat and spurs, I was picturing Clint chomping down on a cigar and somehow making the poncho badass. 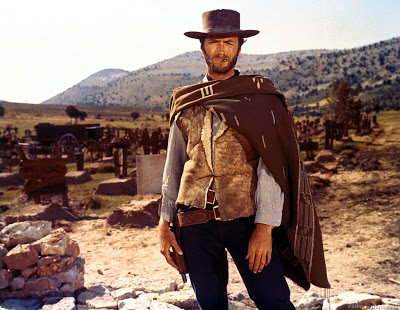 So knowing that it’s a class, the definition of a Spaghetti Western and little else I was blown away by the three-hour epic that ensued.

Right off the bat I was shocked by how the film looked. On the supplemental features on The Good, The Bad and The Ugly DVD, the cast and crew talk about how Leone wanted his movies to look important. Westerns, and Spaghetti Westerns especially, had a reputation by the 60s of being worn out pulp, but Leone treated them as if they were as important as any “real” film and that comes through in every frame. His vision tricks you into forgetting that what you’re watching is “just” a Western.

In sharp contrast to The Good, The Bad and The Ugly’s artful, well-informed visuals are it’s pulpy, larger than life characters.

I spoke last time about Yojimbo and A Fistful of Dollars in the same way.

All three of these films are beautifully shot stories about characters cut right out of comic books, but Kurosawa and Leone have the chops to balance it all so well.

Tuco, the Ugly in The Good, The Bad and The Ugly, represents this the best because, well, he never really shuts up. Tuco is storm of raging emotion and violence. He’s a clown with a gun and out of all of his scenes, his introduction is easily my favorite. Watch as three gunmen silently square off on a dusty street. They approach each other, slowly, and just when you’d expect them to start shooting at one another they charge into a saloon. Shots are fire, the camera pans to a window and Tuco explodes out of it, gun in one hand, turkey leg in the other and a big strip of meat hanging out of his crazy face.

As badass cool as Clint and Lee Van Cleef are, Eli Wallach’s Tuco and all of his sadistic antics often steal the show. There’s just something giddy about watching him pop open a pink umbrella over his head while he leads a water-less Eastwood on a torturous walk across the desert.

It’s easy to see how Leone breathed life into a stale genre.

There’s nothing to make Clint Eastwood a particularly good good guy except for the fact that he kills lots of clearly bad guys. He’s an anti-hero with an emphasis on anti, a hero simply by virtue that alongside everyone else he’s the lesser of many evils. What occasional glimpses of what might make him a good guy—the way he treats a young, dying soldier late in the movie or his disgust at the way the Union and Confederacy were wasting the lives of their men—don’t do anything to tell us about where he comes from, but lets us know where he stands.

He has no past. He is a Western elemental, the physical embodiment of a life spent shooting and wandering with just enough compassion to make him the one to root for.

Van Cleef’s Angel Eyes works the same way, but to the opposite effect.

Leone made Westerns that looked and sounded unlike any Westerns before them.

By taking the setting and themes central to Westerns and mixing them with a cast of characters who range from irredeemable to acceptably morally dubious, punctuating it all with over the top violence and humor where we least expect it, Leone turns the entire genre on its ear.

It’s only fitting that The Good, The Bad and the Ugly ends with the most iconic of all Western endings—a showdown—that is both a slap in the face and a shot in the arm. It’s a dizzying, breathtaking finale that builds audience anticipation and anxiety to such an absurd level all you can do to cut the tension is laugh uncomfortably.

That’s what movie magic is all about, Charlie Brown.

In this article:Movies/DVD, The Old West, Written by Tony Pacitti