“There is a garden in every childhood, an enchanted place where colors are brighter, the air softer, and the morning more fragrant than ever again.”

“I love the smell of napalm in the morning.”

When we think of the fourth of July, we think of independence, patriotism and freedom, but mostly we think of that everlasting concept passed down to us from the founding fathers of the American revolution: how fun it is to blow up stuff. 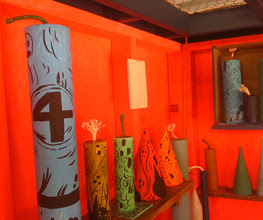 There is a primal excitement involved in the lighting a fuse (both actual and metaphorical); the scent of danger, the promise of combustion, one hell of a bang and the reward of color bursts that require more knowledge and intent than most people realize.

So alluring is the appeal of such things that local governments spend millions of dollars in juvenile safety campaigns annually at this time of year.

I don’t know if it’s been social responsibility, copyright protection or a lack of vision, but it has always surprised me that nobody (to my knowledge) has ever combined this all powerful institution with that other kiddie crack, the humble comic book. Never one to promote irresponsible pyromania and no advocate of the sale of illicit or illegal explosives, I present to you the coolest fireworks stand ever, courtesy of artist Mark Todd.

More images after the jump.

Mark Todd‘s deconstruction of classic comic book iconography has been covered by USA Today. He has had many exhibitions in fine art galleries from coast to coast and in between. 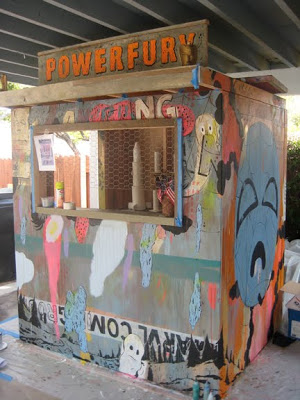 This past Friday, however, was his first solo exhibition.

That show, titled “Force Field” incorporates Todd’s respect and love for (primarily) Silver Age Marvel comic books, filtered through a fine art lens. By use of collage, cel vinyl, wood panel and papier maché, Mark distills Kirbyesque imagery down to the very basics and scrambles the arcane with the mundane to produce something raw and new. Reactions to his visual remixing of sacred sequential art staples are often strong, eliciting either love or hate responses –leaving no room for ambivalence whatsoever. I happen to love his art, which I find makes me love the comic books referenced in his paintings even more.

Most of his paintings sold on opening night, which in this economy is no mean feat.