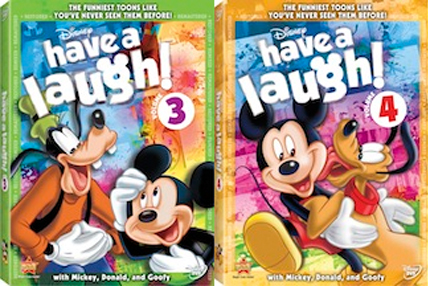 Walt Disney Home Entertainment / Released July 14, 2011
There’s good and bad in both of these releases which are described as:

Volume 3
Set sail for the high seas of hilarity when Mickey, Goofy and Donald go a-whaling and wind up going overboard – literally! Bark with laughter as Pluto is dogged by a pesky gopher who’s making mincemeat of Minnie’s garden. Then, have a ball with Goofy as he hits the links and – BLAM! – his “relaxing” game of golf goes outrageously awry.

Volume 4
Have an outrageously g’day with Mickey and Pluto when their adventure Down Under goes way over the top, thanks to a wayward boomerang and a humongous ostrich. Kick up your heels with Donald as his fireside hula dance “heats up” hilariously. Then, ride a tide of laughs with Goofy as he tries to catch a wave and – BLAM! – gets clobbered by his surfboard.

First of all, kudos to Disney for remastering and releasing the complete unedited shorts.  Considering that the majority of the younger audience only knows Mickey, Donald and Goofy from merchandising and theme parks, it’s nice to see these shorts being released and targeting a younger audience.

Now, the bad.  In addition to the unedited versions, each disc also includes an abbreviated version, cutting down the cartoons and adding “peppier” music; all the better to cater to our A.D.D. audience of younger viewers.  Also included on each disc are 3 BLAMS!, which essentially are one to two minute clips of “action” and “violence” (two things that Disney never did well; that’s all Warner Bros. and MGM) strung together with narration a la any blooper television show of your choosing.  Finally, included on each disc is a Re-MICKS video,  “a mash-up music video of crazy cartoon clips.”

Personally, I love the fact that Disney is promoting their iconic characters with these releases.  I just wish they would not cater to an audience that can’t sit through a six minute cartoon because it’s “too slow”.

In this article:Disney, DVD Review