“So, can we just go right ahead and sign you up for one of our secret Nightstalker decoder rings?”

Over the course of six years, Marvel Entertainment and Wesley Snipes milked the Blade franchise for all the money they could.

The horrible thing is, although Wesley was smart enough to walk away after this (I still want him to do a Black Panther movie), it wasn’t the nail in the coffin.

That was the TV series.

Anyway, to quote Hannibal King, moving on…
This 2004 action movie has a 26% rating on Rotten Tomatoes, where an amazing 70% of the audience report liking it.
This movie is set in the universe of the previous Blade movies, developed around the character created by Gene Colan (RIP), and Marv Wolfman. 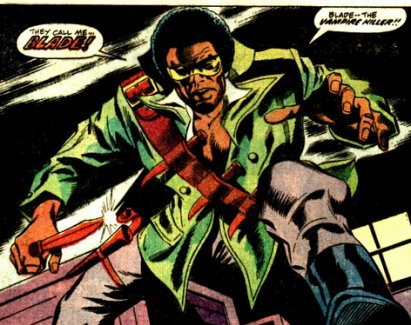 There are vampires. Most people don’t know they exist. That’s because the vampires offer influential people the opportunity to become vampires in return for keeping vampires out of the public eye. These tattooed, adopted, humans are called familiars. Vampires bit Blade’s mother while she was pregnant with him. She “died” in childbirth, and Blade was born with all the strengths of vampires, and none of their weaknesses. He hunts them, while fighting his craving for blood.
Keep reading after the jump to learn why you should Just Look Away from Blade: Trinity. 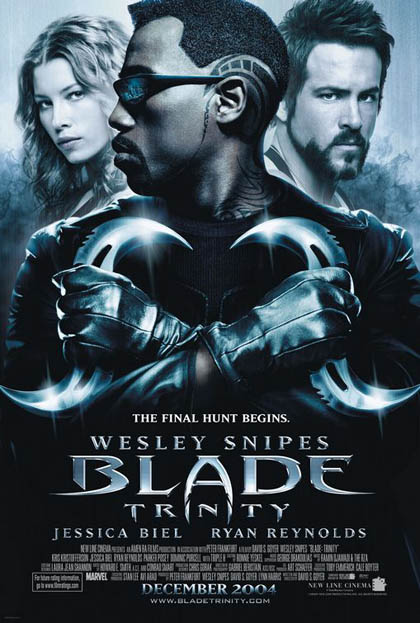 “Her name is Danica Talos. You met her earlier. And unlike typical vampires, her fangs are located in her vagina.“ 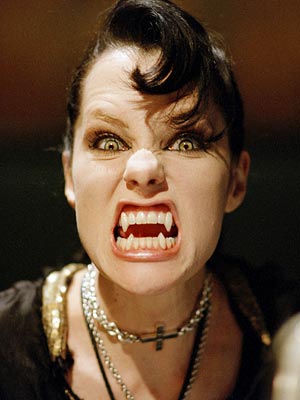 This movie has eye-candy for everybody.

Wesley Snipes returns as Blade. Kris Kristofferson returns, albeit briefly, as Whistler, Blade’s human friend and mentor. Ryan Reynolds and Jessica Biel got super-buff to play Hannibal King and Abigail Whistler. For the indie crowd, there’s Parker Posey as a vampire, Natasha Lyone as a blind scientist, and Patton Oswalt as the Nightstalker’s armorer. For WWE fans, Paul “Triple H” Levesque plays a Pomeranian-loving member of the vampires after Blade and the Nightstalkers.

It also features Dominic Purcell as Dracula, AKA Drake; John Michael Higgins, Callum Keith Rennie, Francoise Yip, Eric Bogosian, and James Remar. Eureka’s Erica Cerra even has a bit part as a “Goth Vixen Wannabe” (once I knew she was in it, I spotted her instantly).
David S. Goyer wrote and directed. He also wrote for the previous two Blade movies. I had a lot of respect for him until I tried watching the Blade TV series on DVD, and realized how soul-crushingly awful it was.

“You know, at some point, you, uh, you might wanna consider sitting down with somebody. You know, have a little share time? Kick back. Get in touch with your inner child, that sorta thing. Also, just a thought, but you might wanna consider blinking once in a while.”
In this movie, the vampires get smart. Well, smarter. They dig the original vampire, Dracula, out from some ancient Sumerian ruins in Iraq and instigate a plot to de-fang Blade. They set him up to kill a human being, and film it. They deliver the film to the news networks, where their familiars make sure it gets aired.
Then the cops and the FBI come after Blade as hard as they can, using information fed to them by the vampires. When they raid Blade’s hideout, Whistler blows it up for some reason. Blade gets caught by the cops, and winds up in the claws of the vampires. The Nightstalkers, led by Hannibal King and Abigail Whistler rescue him.
The Nightstalkers are only human, and they need Blade. They can’t take on the strongest vampires on their own. Blade needs people, though he won’t admit it. He needs people who understand social interaction, and who can supply him with weapons and his serum.
King and Whistler explain that they have a biological weapon that can kill every vampire exposed to it, but they need a genetic key to make it all-powerful. Dracula, AKA Drake, because he is the first vampire, can provide that key. His blood holds the DNA that will complete the bio weapon. The tricks are finding him, getting his blood, and distributing the weapon.
After that, there’s lots of fighting, vampires turning to ash, and pretty much what you expect. 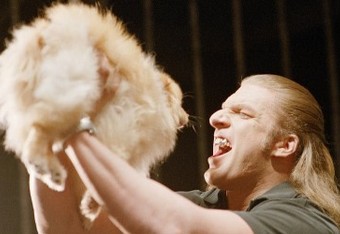 This is a fine action movie, and that’s why 70% of the audience reports liking it. Goyer directs it well. He lights it well enough that you can see what’s happening. He holds the camera far enough back that you can follow the action. It does a good job introducing strong characters. It has a great cast. It moves along at a good clip.
So why the 26% rating?

Well, first of all, it’s an action movie. Blade was a vampire movie, for those of us raised in White Wolf’s Vampire RPG and Anne Rice. Blade II was a monster movie, and pretty much what you’d expect from a vampire movie directed by Guillermo del Toro. Blade: Trinity is an action movie set in the Blade universe, and even the inclusion of Dracula/Drake can’t make it a vampire film (del Toro passed on it when Hellboy got the green-light).

Second, it lacks originality. Go back and watch Blade. Yes, those are the camera techniques that would go on to become famous from The Matrix. Watch Blade II. Yes, those are the CGI stuntmen that made movies like Spiderman possible. The first two Blade movies pioneered special effects that made other, bigger, movies awesome. Blade: Trinity is too lazy, or too cheap, to bother.

Third, the writing is sad and lazy. For example, Blade’s rescue by the Nightstalkers is guaranteed the moment Danica Talos (Parker Posey) says, “No one’s gonna help you now.” That’s a ham-handed cue if ever there was one.
Blade and the Nightstalkers can walk down the street, armed and in their hunting leathers and no one notices? Really? I can accept some sacrifices to get a cool visual, but this is just another example of laziness. No one could be bothered to figure out how to get them into a public building and then into their hunting gear, so they just walk in.
Then there’s the character diffusion.

In the first movies, Blade has a human side. He even shows a sense of humor. In Blade: Trinity, all the humanity and humor goes to the Nightstalkers. Blade’s really just a dick. There’s no attempt at all to build a relationship between his character and his audience. Some of that may come from reported on-set “drama” between Snipes and Goyer. Blade has less than 100 lines in the movie, including one-word sentences. 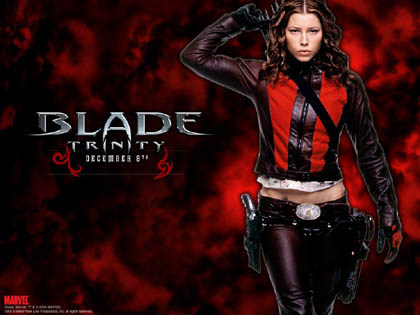 Jessica Biel is really just along for her looks (which is an insult to her and every other actor who deserves a strong character).

Disagree? Then ask yourself why she gets a shower scene and the other Nightstalkers don’t.

In the first movies, we’re told that Whistler’s family was killed by a drifter who turned out to be a vampire. Yet Biel’s character is Whistler’s daughter.

Pick a mythology and stick to it (there was a female character in the comic books named Rachel van Helsing, but Goyer heard about Van Helsing, and decided against including her).

Ryan Reynolds is an enjoyable actor, but his sarcasm is out of place here. 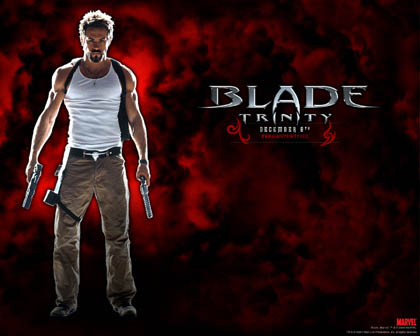 Every story is allowed one big coincidence, and this story’s is Dracula.

The vampires have a final solution, too, a way to farm humans for blood (there’s a scene in Blade that mentions this; it was cut from the film but appears on the DVD). They need Dracula to make it work for some reason, but they also hope that through him they can become “daywalkers.” That would eliminate their need for familiars, who are the weak link in the vampire social structure, as Blade points out.

The Nightstalkers need Dracula to make their weapon work, too, and that’s the big coincidence. Unfortunately, there are too many little ones nibbling at the foundation of this film.

The best thing I can say about Blade: Trinity is that at least it’s not Twilight. What’s your favorite vampire movie?

In this article:Movies/DVD, Sequels, Written by Rich Redman