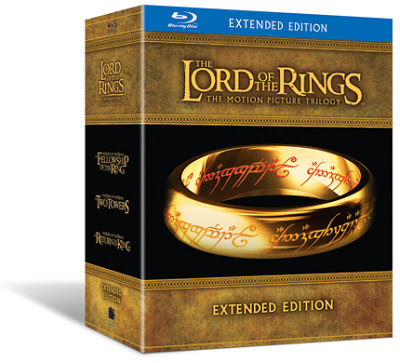 The Pitch
The Lord of the Rings Trilogy tells the story of Frodo Baggins (Elijah Wood), a hobbit who battles against the Dark Lord Sauron to save his world, Middle-earth, from the grip of evil. In the films, Frodo and his fellowship of friends and allies embark on a desperate journey to rid Middle-earth of the source of Sauron’s greatest strength, The One™ Ring — a ring that has the power to enslave the inhabitants of Middle-earth. The trilogy tells tales of extraordinary adventures across the treacherous landscape of Middle-earth and reveals how the power of friendship, love and courage can hold the forces of darkness at bay. Beside Wood, the films star Ian McKellen, Liv Tyler, Viggo Mortensen, Sean Astin, Cate Blanchett, John Rhys-Davies, Billy Boyd, Dominic Monaghan, Orlando Bloom, Christopher Lee, Hugo Weaving, featuring Sean Bean, and Ian Holm, with Andy Serkis as Gollum. The films also star Marton Csokas, Craig Parker and Lawrence Makaoare.

The Review
For those who haven’t paid attention to one of the biggest cinematic phenomenon’s of all time, here’s a brief reminder:

In the first part of the trilogy, The Lord of the Rings: Felowship of the Ring the young hobbit Frodo Baggins inherits a ring; but this ring is no mere trinket. It is the One Ring, an instrument of absolute power that could allow Sauron, the dark Lord of Mordor, to rule Middle-earth and enslave its peoples. Frodo, together with a Fellowship that includes his loyal hobbit friends, humans, a wizard, a dwarf and an elf, must take the One Ring across Middle-earth to Mount Doom, where it first was forged, and destroy it forever. Such a journey means venturing deep into territory manned by Sauron, where he is amassing his army of Orcs. And it is not only external evils that the Fellowship must combat, but also internal dissension and the corrupting influence of the One Ring itself. The course of future history is entwined with the fate of the Fellowship.

In their parallel journeys, the Fellowship will stand against the powerful forces spreading from the Two Towers — Orthanc Tower in Isengard, where Saruman has bred a lethal army of 10,000 strong; and Sauron’s fortress at Barad-dûr, deep within the dark lands of Mordor. The Lord of the Rings: The Two Towers culminates in the astonishing battle for the refuge, Helms Deep, the Kingdom of Rohan’s ancient large stone fortress, besieged by Uruk-hai warriors. In the final installment, The Lord of the Rings: The Return of the King, the final battle for Middle-earth begins. Frodo and Sam (Sean Astin), led by the mysterious Gollum (Andy Serkis), continue their dangerous mission toward the fires of Mount Doom in order to destroy the One Ring. Aragorn (Viggo Mortensen) struggles to fulfill his legacy as he leads his outnumbered followers against the growing power of the Dark Lord Sauron, so that the Ring-bearer may complete his quest.

Peter Jackson did the impossible, adapting what was considered to be an unadaptable trilogy of novels, and doing so while not only satisfying Tolkien’s devoted fans, but also turning the films into a mainstream phenomenon.

I, however, was not one of those who was enchanted by the trilogy.  I didn’t even see the theatrical release of best pitcture winner Return of the King.  The films were visually epic and even though I was (and continue to be) a fan of Jackson’s previous work, I found the films to be sluggish and dull.  After revisiting them in the extended editions, there is a significant improvement with the pacing, the additional running time definitely makes for a better viewing experience.

I’d be foolish not to acknowledge what an amazing accomplishment that these films are, and despite enjoying them more than before, they don’t emotionally resonate with me as they do with millions of other cinegeeks.  Jackson’s verisimilitude to the material never stumbles and watching them in high definition in their extended versions is a total immersion in Middle-earth.

The Extras
The good news is that this set is packed with an almost unprecedented amount of access and behind the scenes material.  The bad news is that all of the supplemental material (with the exception of the multiple commentary tracks on all three movies, The Lord of the Rings: War in the North – The Untold Story Trailer and BD-Live™ enabled feature), is provided on DVD, brought over from the earlier DVD release.  No upgrade, nothing new and no teaser trailer or look from the upcoming Hobbit movie (as previously rumored).  The set also includes a digital download code for each film.  As for the remainder of the extras:

The Lord of the Rings: The Two Towers

The Lord of the Rings: The Return of the King

Concluding Thoughts
Even though I didn’t connect with these films, I can certainly appreciate the talent, craftsmanship and sheer spectacle that they provide.  Unquestionably they belong in the collection of any cinegeek.  Highest recommendation.

For More Details, check out the Official Site and Facebook Page!

In this article:DVD Review, LOTR