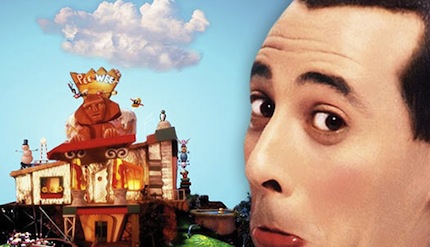 Beloved pop culture icon Pee Wee Herman will be making an appearance this week at Comic-Con.

His Broadway show, filmed previously on HBO will arrive on DVD in October.

PEE-WEE HERMAN TAKES THE STAGE AT SAN DIEGO COMIC-CON®
Thursday, July 21st at 1:15PM
LOS ANGELES, CA, JULY 18, 2011 – Fresh off his recent Emmy® nomination for the HBO production of his Broadway show, Pee-wee Herman will take the stage in Hall H at this week’s San Diego Comic-Con® 2011. The sure-to-be-spectacular solo panel will be in Hall H on Thursday, July 21 at 1:15pm.  The three-time Emmy® nominated HBO special, THE PEE-WEE HERMAN SHOW ON BROADWAY, comes to DVD in October from Image Entertainment.
Said Pee-wee Herman of his upcoming Comic-Con® visit: “Initially I was coming to San Diego with the cast of Twilight, but we’ve since decided it’s better for them to have two separate panels. I am SOOOO excited I can hardly breathe!”
THE PEE-WEE HERMAN SHOW ON BROADWAY reunites Paul Reubens and Marty Callner, who directed both this new television production and the 1981 HBO special “The Pee-wee Herman Show.”

The character of Pee-wee Herman is experiencing a remarkable renaissance, with enormous followings on Facebook, Twitter and Foursquare.  Opening to critical acclaim at the Stephen Sondheim Theatre on Nov. 11, 2010, “The Pee-wee Herman Show” is 90 minutes of subversive humor and childlike wonder based on both Reubens’ original stage show, “The Pee-wee Herman Show,” and the Emmy®-winning Saturday morning TV show, “Pee-wee’s Playhouse,” which became a cultural phenomenon. “Pee-wee’s Playhouse” which celebrates its 25th Anniversary in September 2011, garnered 22 Emmy® awards during its original run, and was recently ranked among the “Ten Best Kids Shows With Grown Up Appeal” by NBC’s Today Show. Renowned writer-director-producer Judd Apatow recently announced that he and Reubens are developing a new feature film based on the character.