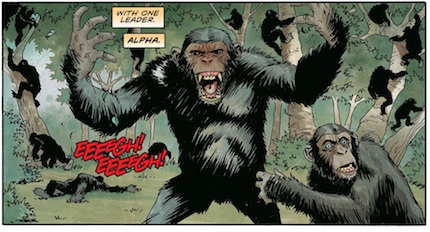 On August 5th, Rise of The Planet of The Apes will be released to theaters.

And if you’re a Ape-fanatic like me, you’re probably already salivating at how this prequel fits into the overall continuity of the series.

Well, as it turns out, there’s a chapter coming prior to the birth of Caesar, and it can only be found via a collaboration between Boom! Studios and Twentieth Centrury Fox.

The webcomic is live at apescomics.com and for all of the details, check out the press release after the jump.

A free online digital comic book prequel to Twentieth Century Fox’s epic motion picture RISE OF THE PLANET OF THE APES, will debut in time for the picture’s release in theaters across the world on August 5. The comic, whose story is set before the events detailed in the film, presents an epic tale of two apes brutally taken from the wild and driven into a life of captivity and experimentation – a journey that will alter the fate of the world forever.

Acclaimed PLANET OF THE APES comic series writer Daryl Gregory and sensational artists Damian Couceiro (HAWKS OF OUTREMER) and Tony Parker (DO ANDROIDS DREAM OF ELECTRIC SHEEP?) set the stage for… RISE OF THE PLANET OF THE APES, the first live-action film in the history of movies to star and be told from the point of view of a sentient animal — a character with human-like qualities, who can strategize, organize and ultimately lead a revolution, and with whom audiences will experience a real emotional bond. The film was impossible to make until the technology, invented for Avatar and now advanced to a new dimension, caught up to the idea behind the movie.

A new free five page RISE OF THE PLANET OF THE APES digital comic book story debuts on https://www.apescomics.com July 13th and each Wednesday afterwards until the final 10 page epic conclusion on August 3rd, two days before the film’s release!

“It’s incredibly exciting to be a part of a new dynasty with one of the most beloved franchises of all time,” says BOOM! Studios Founder and Chief Executive Officer Ross Richie. “We’re proud to be working closely with Fox to tell a prelude story in the fantastic and story-rich world of the RISE OF THE PLANET OF THE APES. From what I’ve already read I can tell you that the online prelude will be exploding with enough excitement and surprises to whet the appetites of Apes fans new and old. Prepare for the RISE OF THE PLANET OF THE APES with the free online prelude!”

In April BOOM! Studios announced they were publishing an all new ongoing PLANET OF THE APES comics series set in the original classic 1968 movie continuity. Subsequently, a flurry of fan interest caused a complete sell-out of PLANET OF THE APES #1, sending the seminal issue into second print even before hitting store shelves!

In this article:Comic News, Movies/DVD, Planet of The Apes, Press Release, Science Fiction