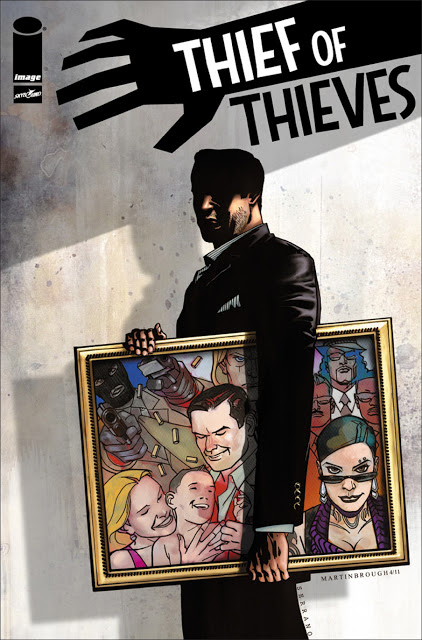 Coming early next year from Robert Kirkman’s Skybound imprint is Thief of Thieves.

The story will follow a past-his-prime super-thief, Conrad Paulson, who, though still at the top of his game, has a whole slew of domestic issues he needs to solve and is wracked by a desire to retire.

What he ends up doing is stealing from other thieves.

According to an interview with USA Today, Kirkman is using a team approach to writing this series.  Different writers will write different arcs as they evolve.

The first member of the writing team is Nick Spencer of fan favorite Morning Glories fame.  Kirkman is planning on taking an arc himself, but there have been no announcements who else will be joining the team.

Kirkman chose Spencer to write the first arc of the series because he was a fan of Spencer’s ability to really develop his characters.  One could imply from this that Thief of Thieves is going to be a character driven title.

The series will be illustrated by Shawn Martinbrough, known for Luke Cage Noir and Batman: No Man’s Land.

Check out a preview of the first issue here.