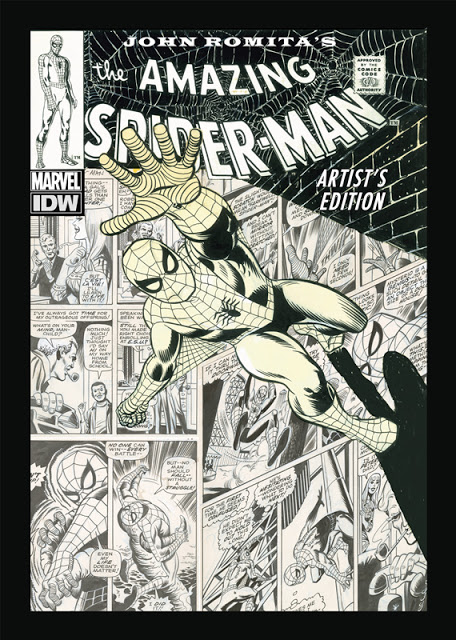 Today, they announced another title in conjunction with Marvel Comics, John Romita’s The Amazing Spider-Man.

Romita took over the art duties on Spider-Man after series co-creator Steve Ditko left the book. It was a hard act to follow, but Romita would soon make the book his own and go on to be arguably the most popular Spider-Man artist to ever draw the wall-crawler.

“John Romita Sr. is one of the most beloved artists to ever pencil for Marvel,” said Artist’s Editions editor Scott Dunbier, “his work is beautiful, the lines he lays down exquisite!”

An oversized, hardcover collection, JOHN ROMITA’S THE AMAZING SPIDER-MAN: ARTIST’S EDITION will feature 144 pages of beautiful stories and a gorgeous cover gallery. All the pages in the ARTIST’S EDITION will be scanned from original art to ensure the highest possible quality reproduction. While appearing to be in black and white, each page will be scanned in color to mimic as closely as possible the experience of viewing the actual original art—for instance, white-out corrections and blue pencil notations.

About IDW Publishing
IDW is an award-winning publisher of comic books, graphic novels and trade paperbacks, based in San Diego, California. Renowned for its diverse catalog of licensed and independent titles, IDW publishes some of the most successful and popular titles in the industry, including: Hasbro’s The Transformers and G.I. JOE, Paramount’s Star Trek; HBO’s True Blood; the BBC’s DOCTOR WHO; Toho’s Godzilla; and comics and trade collections based on novels by worldwide bestselling author, James Patterson. IDW is also home to the Library of American Comics imprint, which publishes classic comic reprints; Yoe! Books, a partnership with Yoe! Studio; and is the print publisher for EA Comics.

About Marvel Entertainment
Marvel Entertainment, LLC, a wholly-owned subsidiary of The Walt Disney Company, is one of the world’s most prominent character-based entertainment companies, built on a proven library of over 8,000 characters featured in a variety of media over seventy years.  Marvel utilizes its character franchises in entertainment, licensing and publishing.  For more information visit www.marvel.com.