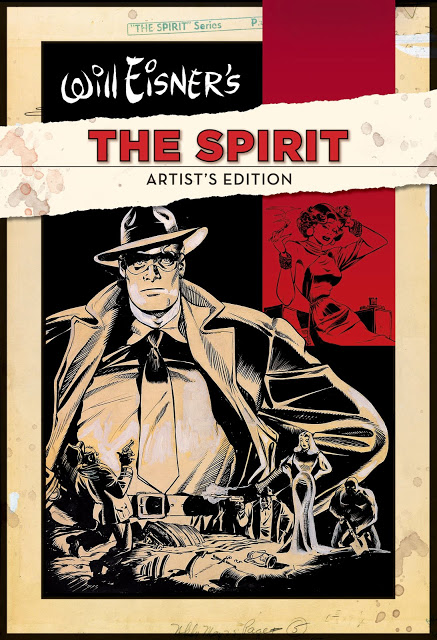 Following on the heels of their announcement to publish John Romita’s The Amazing Spider-Man: Artist’s  Edition, IDW has just announced they are doing the Artist’s Edition for Will Eisner’s The Spirit.

Press Release after the jump.

San Diego, CA (July 22, 2011)—On this third day of San Diego Comic-Con 2011, IDW Publishing was proud to announce yet another impressive addition to the company’s lauded Artist’s Edition series, with WILL EISNER’S THE SPIRIT: ARTIST’S EDITION. This fifth book in IDW’s series, WILL EISNER’S THE SPIRIT: ARTIST’S EDITION will be only the second edition in the larger, Golden Age size and will available in 2012.

Eisner created The Spirit in 1940 but was soon drafted. Upon his return from War World II, he once again took up the reins of his most notable creation. Eisner went on to produce some of the most memorable and influential stories ever published, and in seven page installments on a weekly schedule! After the Spirit ended in 1952,Eisner explored other commercial ventures until returning to popular sequential storytelling in 1978 with the groundbreaking A Contract With God.
“Will Eisner was a giant in the comics world,” said Artist’s Editions editor Scott Dunbier. “His work is like a how-to textbook for cartoonists, and absolutely breathtaking for fans.”
An oversized, hardcover collection, WILL EISNER’S THE SPIRIT: ARTIST’S EDITION will feature 144 pages of beautiful Will Eisner stories. All the pages in theARTIST’S EDITION will be scanned from original art to ensure the highest possible quality reproduction. While appearing to be in black and white, each page will be scanned in color to mimic as closely as possible the experience of viewing the actual original art—for instance, white-out corrections and blue pencil notations.
“I’ve had the thrill of holding most Will’s original Spirit art in my hands,” said Denis Kitchen, Eisner’s longtime publisher and now art agent for the estate. “But no publication of The Spirit that I or any other publisher has issued over the years has done true justice to Will’s originals. The delicate brush feathering, hint of pencils, even areas of White-out, are effectively lost with standard reproduction. That will finally change when IDW’s large Artist’s Edition comes out. I’m delighted to finally be able to share the sheer pleasure of these authentic reproduction with other aficionados.”
This announcement follows IDW’s previous revelations that the company will publish WALLY WOOD’S EC STORIES: ARTIST’S EDTION in October 2011, and JOHN ROMITA’S THE AMAZING SPIDER-MAN: ARTIST’S EDITION in 2012. IDW’s Artist’s Edition series began in 2010 with DAVE STEVENS’ THE ROCKETEER: ARTIST’S EDITION, and continues at San Diego Comic-Con 2011 with the launch ofWALTER SIMONSON’S THE MIGHTY THOR.