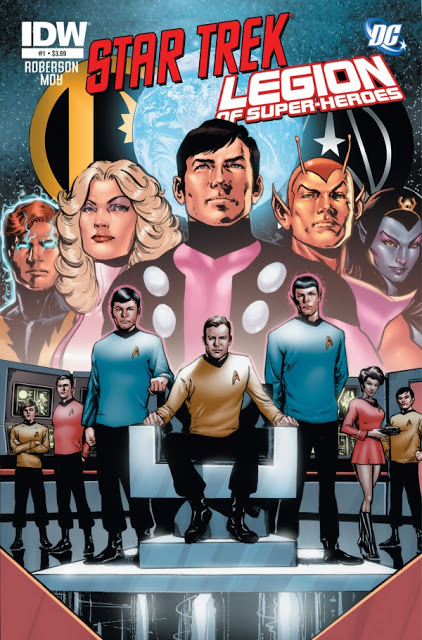 IDW will be publishing a Star Trek/Legion of Superheroes crossover 6 issue series coming in October. The series is to be written by Chris Roberson and Jeffrey and Philip Moy

“The original Starship Enterprise has traveled across time and space on its five-year mission, but it will be entering the DC Universe for the first time this summer. IDW Publishing is proud to announce its first-ever crossover with DC Comics’ Super Heroes in STAR TREK/LEGION OF SUPERHEROES, a six-issue monthly series beginning in October 2011.

STAR TREK/LEGION OF SUPERHEROES tells the tale of the original crew of the Starship Enterprise, who beam down to a planet only to discover that the planet isn’t their intended destination, or even in the right universe. At the same time, a group of “Great Darkness Saga” Legionnaires inside a time sphere find themselves cast into the 23rd century, but it’s not the 23rd century as they know it, either. STAR TREK/LEGION OF SUPERHEROES is a galaxy-spanning adventure that draws both teams together to face a menace that includes Khunds, Klingons, Borg, and other threats that aren’t quite as they should be. The egalitarian United Planets in one universe and a United Federation of Planets in another is now the Imperial Planets of Terra, a dark empire focused on war and conquest, and that’s just the beginning for this special series.

“Nothing like kicking off our first foray into the DC Universe with a story that spans dimensions and centuries,” said Chris Ryall, IDW’s Chief Creative Officer/Editor-in-Chief and the lead editor on this crossover. “As a huge fan of both of these teams and the eras we’re playing with here, as well as an admirer of the talents involved with this tale, I couldn’t be happier.”

Weaving these disparate universes and characters into a dark, foreboding and mysterious saga is Eisner-nominated writer Chris Roberson (iZombie, Superman), with art by Jeffrey and Philip Moy, both of whom have tackled the Legion and Star Trek in other forms. Phil Jimenez, will provide covers for the entire series, while each issue will also feature variant covers from classic Legion of Superheroes artists such as Keith Giffen, Steve Lightle, and Mike Grell, as well as IDW mainstay and Best Artist Eisner-nominee Gabriel Rodriguez (Locke & Key) and others.

“We’re thrilled to be joining such iconic characters together in an exciting adventure that spans space and time,” said Bob Harras, DC Comics Editor-in-Chief.

The STAR TREK/LEGION OF SUPERHEROES series also offers a note of nostalgia for DC Comics and Star Trek, as that publisher produced the popular sci-fi comics under both the DC Comics banner in the ‘80s and the Wildstorm banner in the ‘90s. Now, under IDW’s auspices, both the 23rd and the 30th centuries might never be the same after this new series is complete.

“Chris Roberson, who’s incredibly knowledgeable about both series, managed to not only weave both teams together into a clever story, but he also found a way to tie both universes together through a shared villain that fans will never expect to see,” added Ryall. “And the Moys bring a sense of dynamism and energy to not only the characters we know but also in the designs for some special merged-universe characters, too. Add to that the chance to work with guys I greatly admire on the series’ covers and you’ve really got the makings of something special here. I’m really happy that DC has been such a welcoming partner on the crazy things we’re going to do here.”

In this article:Comic News, SDCC, Written by Daniel Elkin