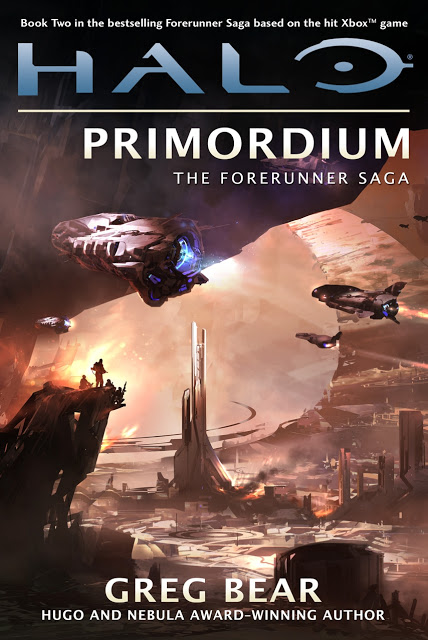 Today is HALO day at Comic-Con!

After the jump, read the entire press release regarding Primordium, the second book in Greg Bear’s Halo trilogy

Tor Books announces HALO: PRIMORDIUM by legendary science fiction author Greg Bear
Book two in the New York Times bestselling Forerunner Saga
A long time ago, I was a living, breathing human being. I went mad. I served my enemies. They became my only friends…
Tor Books, an imprint of Tom Doherty Associates, LLC – the largest publisher of science fiction in the world – is excited to reveal the title, cover, and release date for the second novel in the Halo Forerunner Saga, HALO: PRIMORDIUM, written by legendary science fiction author Greg Bear. Book one of the Forerunner Saga, Halo: Cryptum, is currently available in hardcover, and will release in trade paperback this fall.  Book two, HALO: PRIMORDIUM, will release January 3, 2012 alongside a simultaneous audio edition.
The New York Times bestselling Halo® series, based on the hugely successful Halo videogames franchise for the Xbox 360, has sold millions of copies, part of a global phenomenon that has dominated the science fiction landscape over the last decade.
In Halo: Cryptum, Greg Bear began a three-book arc set in the era of the Forerunners, the ancient and enigmatic creators and builders of the Halos, that continues in HALO: PRIMORDIUM. In Halo: Cryptum, a young, rebellious Manipular began a dangerous search for artifacts of the Precursors — long-vanished superbeings of unknowable power and intent — setting off a devastating chain of events that nearly ended the Forerunner empire. Now two humans, former companions of the Manipular, find themselves captives and strategic pawns in a cosmic game whose madness knows no end — a game of ancient vengeance between the powers who seeded the galaxy with life, and the Forerunners who expect to take up their sacred Mantle of duty to protect all living things.
“I’m having great fun working through the action and growing mysteries in HALO: PRIMORDIUM, as humans engage in an epic odyssey across a damaged, war-torn Halo, facing the Flood, rogue AIs, and the stunning testament of the Last Precursor,” says author Greg Bear. “This is classic SF territory for me, and it’s a terrific opportunity to work with the 343 team, and to contribute through these books to both future games and the Halo universe in general.”
“In Cryptum, Greg began an exploration of a vast and imposing part of the Halo universe,” says Frank O’Connor, Franchise Development Director for 343 Industries. “In PRIMORDIUM, he takes that story closer to the ground, exploring characters, motivations and mysteries that began in Cryptum and continuing a journey that’s fascinating, horrifying and inspiring, all at once.”
Tor Books has proudly partnered with Microsoft and 343 Industries to publish every book set in this iconic universe.  Along with the first two books of the Forerunner Saga, Tor has also announced another all-new Halo trilogy penned by Karen Traviss that will explore the Halo Universe in the wake of the final events of Halo 3. Traviss’s first novel, Halo: Glasslands, will come out October 25, 2011.
The Halo franchise is an award-winning collection of properties that have grown into a global entertainment phenomenon. Beginning with the original “Halo: Combat Evolved” for Xbox in 2001, the rich fiction of the franchise has since inspired a series of blockbuster Xbox and Xbox 360 video games, New York Times best-selling novels, comic books, action figures, apparel and more. To date, sales in the Halo franchise have eclipsed $2.3 billion. Microsoft recently dropped a bombshell on Halo fans at E3 with two big announcements. Coming Nov. 15 2011, Microsoft will release “Halo: Combat Evolved Anniversary,” a spectacularly remastered version of the original “Halo” campaign bundled with some of the most beloved multiplayer maps in “Halo” history – all created in celebration of the 10th anniversary of one of the greatest franchises in gaming history. Also announced was “Halo 4,” the hugely-anticipated next blockbuster installment that will mark the beginning of a new Halo trilogy when it releases in-stores during the 2012 holiday season.